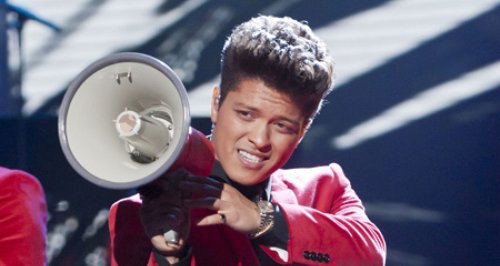 The 'Locked Out Of Heaven' star gives fans even more chances to see him live in 2014.

Bruno Mars has released new tour dates as he announces the second leg of his 'Moonshine Jungle' outing.

The 'When I Was Your Man' star hit the road in October last year and will be back out across North America from April-August.

It has also been revealed that the singer will be joined by Pharrell on select dates of the tour.

Most dates will feature Aloe Blacc – who most recently teamed with Avicii for the huge track 'Wake Me Up'.

Meanwhile, Bruno is preparing for one of the biggest gigs of his career when he performs at the halftime show of the NFL Super Bowl next month.

This week it was also revealed that he will be joined by rockers the Red Hot Chili Peppers during the performance.