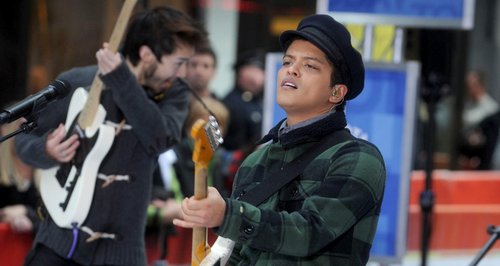 The 'Doo Wops & Hooligans' singer takes to Twitter to tell his fans the good news.

Bruno Mars has revealed that he will be releasing the official music video for his new song 'Gorilla' this coming Monday (14th October).

The 'When I Was Your Man' singer, who is currently on the road with his 'Moonshine Jungle' world tour, announced his plans on Twitter yesterday evening.

The track follows on from three previous releases from his most recent album 'Unorthodox Jukebox' – including 'Locked Out Of Heaven'.

His recent hit 'Treasure' also scooped the prize for Best Choreography at the August MTV VMAs with 'Locked Out Of Heaven' also taking Best Male Video.

This Monday I'm doing it! #GorillaMusicVideo

Meanwhile, Bruno is being eyed up by female superstar Katy Perry for a future collaboration.

He also celebrated turning 28 this week when he performed at London's O2 Arena.