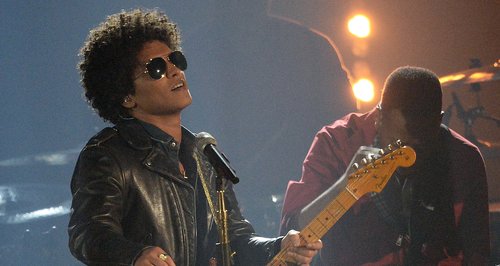 The 'When I Was Your Man' wins the title following the success of latest album 'Unorthodox Jukebox'.

Bruno Mars has been named Billboard's Artist Of The Year for 2013.

The US star was honoured for his chart successes over the past twelve months with hit single after hit single and an incredible second album 'Unorthodox Jukebox'.

He charted five singles in the Hot 100 with 'When I Was Your Man' and 'Locked Out Of Heaven' hitting the top spot.

His latest album maintained a steady pace in the Billboard 200 from it's release last December and selling over 1.8 million copies.

"It's been an incredible year," says co-manager Brandon Creed when asked about Mars' triumphs. "We definitely had goals going into this project to support the artist, his music and performance.

"But we tried to do everything for a purpose, nothing gratuitous. And we're continuing to lay and build the foundation for him to evolve musically and continue to connect with the audience."

Bruno has also been out on the road with his 'Moonshine Jungle' world tour and had several high-profile performances – including a collaboration with Rihanna and Sting at the Grammys 2013.

The singer is also gearing up for a huge 2014, which includes a performance at the halftime show of the NFL Super Bowl.