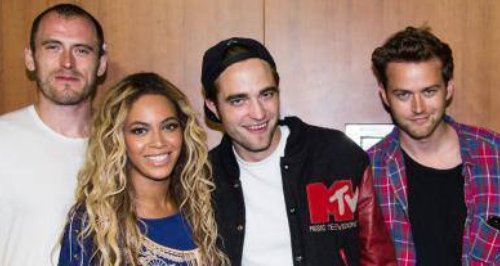 The 'Countdown' singer and Hollywood star are seen arm in arm backstage at a recent tour show.

Beyonce is seen posing with Twilight hunk Robert Pattinson in a new picture from her world tour, proving wrong the recent rumours that she snubbed him at a meet and greet.

The 'Love On Top' singer met with The Twilight Saga actor Robert, who is best known for his role as vampire Edward Cullen, after her performance at the Staples Center in Los Angeles earlier this month (1st July).

Despite reports to the contrary the pair both look very happy to be photographed together, as they pose next to popular indie band Death Grip.

Several weeks ago rumours emerged that Robert and some of his friends had attempted to get backstage to meet Beyonce after 'The Mrs. Carter Show' performance but had been refused entry.

Check out a picture of Beyonce on stage on her 'The Mrs. Carter Show' tour below (Credit: PA):

However, the newly posted image confirms Beyonce and Robert did get to spend some time together, with the US star glowing in a blue tunic outfit and the Hollywood star keeping things casual in a backwards cap, white t-shirt and jeans.