5SOS Talk Nudity, Tattoo Meanings And Girls Fancying Other Members Of The Band! 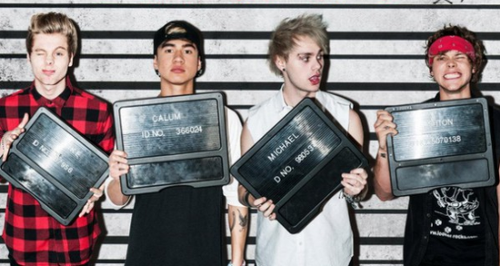 5SOS Talk Nudity, Tattoo Meanings And Girls Fancying Other Members Of The Band!

5 Seconds of Summer’s obsession with nudity is definitely not something we have ANY complaints about – but it seems the boys don’t just do it for show – they like to do their day to day tasks in the nude too!

Luke Hemmings revealed to Seventeen’s Hot Guy issue, “Once when we lived in London, I went downstairs and Calum was making a cup of tea naked, so I took a photo. Calum's butt is everywhere now." Erm, yeah – we’ve seen it!

And the constant nakedness is a great way for Calum Hood to show off his collection of tattoos – and his inkings also have special meanings to him.

Calum explained his tattoo of a bird with ‘Mali-Koa’ underneath it, “It's my sister's name. She's my best friend, and no one else gets me like she does. I go to her for everything. I also have a tattoo of my parents' initials, so they're always with me. It brings me good luck. Family is everything." Aww!

As the boys have spent so much time away from their families while on tour with One Direction, they have formed strong friendships with the 1D boys.

Ashton Irwin in particular has bonded with Niall Horan, saying, “He comes from a cool family, and he's a really genuine dude. He's got a good sense of humour and he loves rock bands. We really bond over that."

And with so many boys spending time together, do they ever fight over girls? Apparently not, though Michael Clifford has admitted that he has been unlucky in love!

He confessed, “I guess I'm a little girl crazy. Back in school, girls I liked actually liked Calum or Luke. I didn't let that make me jaded, but it's been a struggle to get girls to like me. I've learned not to focus on little crushes. Even now, I still get friend-zoned!" Erm, are they crazy?!