5 Second Of Summer may have been performing one man down, after Michael mislaid his passport, but they MORE than made up for it by giving 100% to the Capital Jingle Bell Ball 2014 with Morrisons crowd for a SPECTACULAR opening show!

The 'Don't Stop' band kicked off day two of the Jingle Bell Ball tonight (7th December), and got a HUGE scream from the crowd to launch the show.

Earlier today the 5SOS boys confirmed band member Michael sadly wouldn't be joining them for their JBB set, being stuck in the USA after losing his passport! #SadFace

But we're pretty sure everyone who watched their set went home MORE than satisfied... thanks to them playing hit after hit!

See the moment the 5SOS boys headed up to that O2 Arena stage with just MINUTES to go before they went out to entertain the masses...

And just like that 5SOS emerged onto the stage to power through their first number... the undeniably catchy 'Don't Stop'!

All three boys were decked out all in black, looking VERY chic indeed, and the screams from 16,000 fans watching the show were DEAFENING!

Next up the boys headed straight into their latest hit single 'Good Girls', with drummer Ashton going so crazy on the drums that his hair was flying all OVER the place! You crazy kid, Ashton, you!

"O2 Arena, how are you feeling tonight?" the boys asked the crowd. " Thank you very much for having us. You might notice we look a bit different! We're missing a red-headed skinny fellow!

"So you guys have to help us out tonight, we're one man down!" Ashton added. "O2 arena! Tonight, you are Michael!"

The 5 Seconds Of Summer boys then slowed things down for a moving rendition of 'Amnesia', as Luke and Calum exchanged vocals and generally just made the whole arena SWOON in unison.

Finally, 5SOS rounded off their amazing JBB set with their first EVER single 'She Looks So Perfect'!

Smoke filled the front of the stage, the anthemic opening lines rolled out... and the O2 Arena joined 5 Seconds Of Summer to sing along and round off the first set of the night in a BIG way!

Confetti exploded in the arena, the drums went crazy and just like that... 5SOS had knocked the socks off our #CapitalJBB crowd!

5 Seconds of Summer were clearly buzzing to perform for their fans all day at the show, judging by some of their tweets!

Excited to open the #CapitalJBB show tomorrow, get ready to party if you’re coming !! http://t.co/APk9XQEjNT @CapitalOfficial

… but sadly Michael couldn't make it after losing his passport in America:

So Mikey lost his passport :( That means he cant fly to the UK & has to stay in the US, so were playing #CapitalJBB as a three piece today..

We're really sorry to everyone expecting to see the four of us on stage, we're still gonna rock out so get ready to party ! @CapitalOfficial

And it's clear the #5SOSFam were loving the boys' work! Just check out some of these tweets and see for yourselves!

PLUS... the boys were certainly looking hot, hot, HOT out on that red carpet earlier in the night! Don't you think, #5SOSFam? 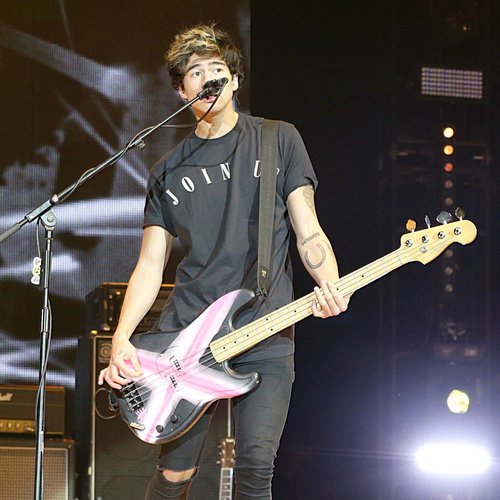