People Are Sharing Messages They Wished They Sent Their Ex's... AND THEY'RE BRUTAL!

We've got a few choice words for some of our ex's... But we probably can't say them here! Which is why we're thankful everyone's taken to Instagram to say the hilarious stuff for us!

18+ Warning: Some of these texts contain offensive language (obvs...)

Have you ever just wanted to tell your ex how much of a *bleep*ing mother *bleep*er they are? Well, now you can. And it looks like a lot of you are!

> "I'm Gonna Squirt" - These NFL Players Do Say Some Pretty Messed Up Stuff!

One 19-year-old, Rora Blue, created the 'Unsent Project'; a trend whereby you write a message to your ex and tell them exactly what you want about the relationship. 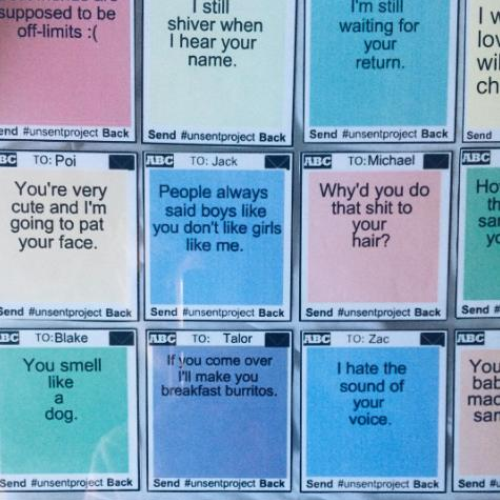 While some of them were pretty soppy; snore... The Internet - in true Internet form - got HARSH and HILARIOUS! You just need to see some of these responses. And be thankful you never dated these guys.

#unsentproject was started by @rorablue and is a collection of texts people wished they had sent to their first love paired with their loves name and a color that reminds them of them. to learn more visit her insta. I'm v happy to be a part of this project and get to spread it farther through the country. more pictures are soon to come.

"I gave all your stuff to goodwill :)" #unsentproject I think the only cure for gloomy days is lots of coffee

"Why'd you do that shit to your hair?" #unsentproject

A photo posted by Elisabetta Toffolon (@elisabettatoffolon) onOct 6, 2015 at 8:10am PDT