So much so, that she's had to turn the comments off!

On Father’s Day, Pretty Little Liars’ Lucy Hale took to Instagram to thank her Dad for all he had done.

Because, even if he doesn’t have Instagram, did you even celebrate Father’s Day if it’s not on social media.

> Pretty Little Liars’ Lucy Hale Has Had Nude Photos Leaked And It Needs To Stop Now!

You taught me to have soul. I love you daddy.

Writing alongside an old photo of herself with her Dad, she commented, “You taught me to have soul. I love you daddy” and we basically self-combusted with how cute it was.

However, some fans noticed a later comment from the actress which read, “ugh I was so fat”. 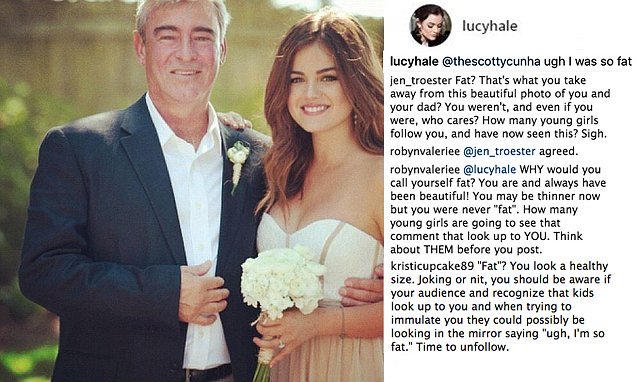 Said comment really upset some of her followers due to her young fan base. Many Instagram fans were concerned that it wasn’t the right example to be setting and so flooded the photo with comments such as “How many young girls follow you, and have now seen this? Sigh” and “WHY would you call yourself fat? You are and always have been beautiful!”.

Disclaimer: We think Lucy is B-E-A-UTIFUL.

And it seems that even the lovely Lucy herself has acknowledged the power of her comments and has taken to Twitter to apologise.

Sometimes I forget that people are watching everything I do and I say things I don't mean. I'm extremely sorry if my comment about my weight

Offended anyone. Sometimes we can be our own worst enemy. I know people look up to me and I should be way more aware of what I say sometimes

Thanks for all the love and support. Hope y'all can forgive me !