Fans think Charlotte’s expecting based on this photo.

The public are definitely keen to jump to conclusions when it comes to celebrity pregnancies, and Charlotte Crosby’s boyfriend, Joshua Ritchie has spoken out after fans assumed Charlotte was expecting based on her latest Instagram pic.

Charlotte posted a loved up snap of her with Josh on Instagram in which she had unbuttoned her high-waisted shorts… which apparently is enough to lead some people to assume t’s because she is pregnant. 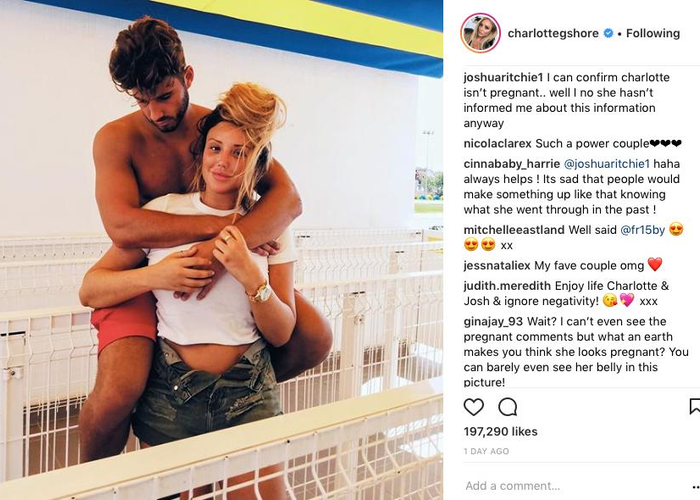 Taking to the comments, Joshua clapped back in spectacular fashion, telling Charlotte’s followers, “I can confirm charlotte isn’t pregnant.. well I no she hasn’t informed me about this information anyway”. [sic]

Charlotte’s made no secret of her desire to try for a baby next year before she turns 30, following on from her tragic ectopic pregnancy with ex-boyfriend and former co-star Gary Beadle.

She previously told Closer magazine, “I don’t want to be an old mum, I want to be a cool young mum.

“Having a family is the one thing in life I really want – I’ve done so much with my life already, and becoming a mum is my dream.”

Mystery solved for those speculating – Charlotte’s not pregnant!

> Grab Our App To Get All The Latest On Ariana And Pete's Relationship!