She might be fresh out of a relationship with Stephen Bear, but Charlotte Crosby’s fans have already eyed up a new man for her… none other than TOWIE’s Pete Wicks, apparently!

After Charlotte was snapped sitting next to Pete in a purely platonic group pic, people were quick to wonder what was going on between the pair of them, as he is also newly single after his split from Megan McKenna.

Charlotte posted a snap of her with Pete, her Geordie Shore castmate Holly Hagan and James Lock, Yazmin Oukhellou and Amber Turner on Instagram which got the rumour mill buzzing.

How cute would @P_Wicks01 and @Charlottegshore be together! Weapon couple

@Charlottegshore I really do HOPE u exchanged numbers with @P_Wicks01

I think @Charlottegshore and @P_Wicks01 would make beautiful babies #justsaying

Charlotte and Pete soon took to the comments section of her post to clarify that they were nothing more than mates, and that she was good friends with Pete’s ex, Megan, too. 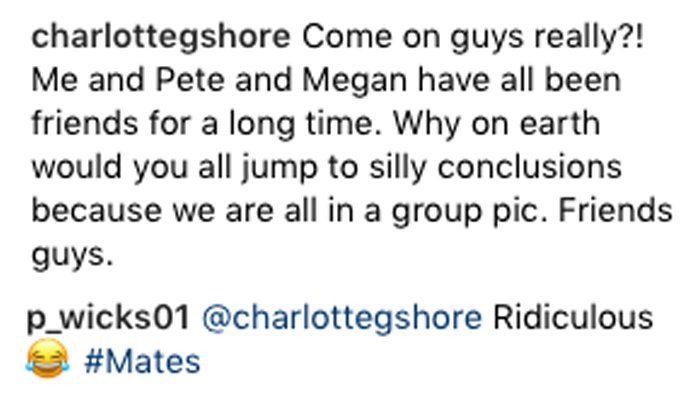 They WOULD look amazing together, but we love that Char respects the girl code about dating your pals’ exes even more.