A Screengrab Has Made Everyone Believe Kylie's Gone Into Labour

Kylie Jenner's pregnancy has got the world on a string right now. Travis Scott, the supposed father has kept as quiet as a Katy Perry fan at a Taylor Swift concert and we're all here just waiting for any titbit of baby news.

Well, it happened. Sort of. The Facebook page 'The Morning Breathers' posted a screenshot of a direct message which a girl who claimed that she'd seen Kylie Jenner in an L.A hospital on Friday afternoon. 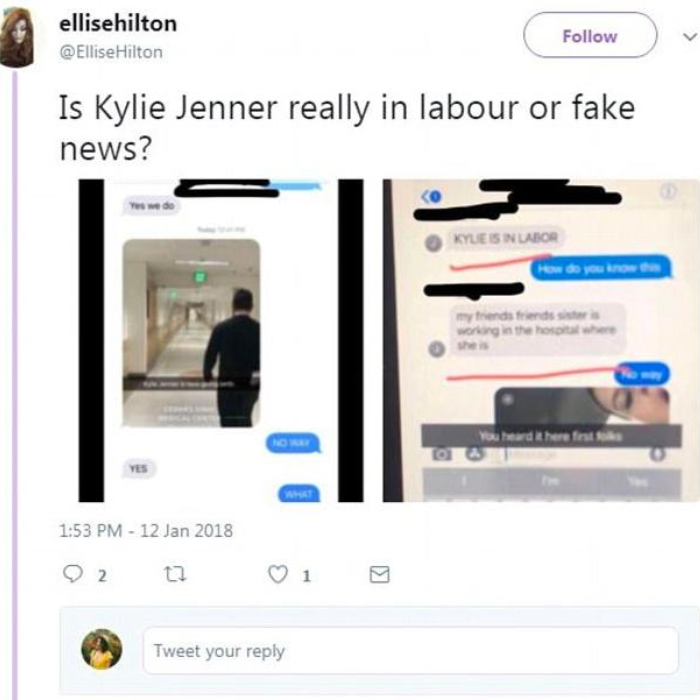 As soon as the image appeared, eager fans began to connect all the dots (albeit in the wrong order). A snap taken from soon-to-be Daddy Travis Scott's Snapchat resurfaced with the caption, "Make it home to ya one way or another".

This, in turn was proved to have actually been posted in December, however that didn't stop Jenner-fans drawing all sorts of baby-related conclusions.

> Stay On Top Of ALL The Pregnancy News Surrounding Kylie Jenner RN With Our App!

With obviously no info released from the Jenner camp, fans took to Twitter & the news spread like wildfire!

Me scouring the internet for clues about @KylieJenner being in labour #KylieJenner pic.twitter.com/x1haBWPskp

Is Kylie Jenner in labour or not, I’ve literally never been more stressed pic.twitter.com/nO3PoN7bqD

I just read that Kylie Jenner is in labour pic.twitter.com/UEvQI5nKnL

Did Caitlyn Jenner give away the fact that Kylie's pregnant on national TV anyway?!