Yes, this is actually happening and you can be watching Taylor Swift, Camila Cabello and Charli XCX all on one night - what an incredible show that's gonna be!

We always get hyped at the prospect of seeing our favourite artists live, so you can imagine our reaction when Taylor Swift announced that she was gonna be heading over to the UK on tour and was bringing Camila Cabello and Charli XCX with her!

The 'LWYMMD' star will be taking over London and Manchester with four HUGE shows that are undoubtedly set to create some iconic and memorable moments.

When is Taylor Swift's 'Reputation' Tour?

Taylor's live shows are taking place on 8th and 9th June in Manchester, Friday 15th and Saturday 16th June in Dublin and 22nd and 23rd June in London.

Where can I get tickets to see Taylor Swift live and when are they on sale?

Tickets are on sale now - so make sure you grab yours ASAP because these are sure to fly out the door!

Who is supporting Taylor Swift on tour?

With an always-amazing live stage show and two superstar support acts in Camila Cabello and Charli XCX, where else would you wanna be this summer other than partying with T Swizzle!?

Camila Cabello released her debut solo album 'Camila' back in 2017 and wowed us with the likes of hit singles 'Havana', 'Crying In The Club' and 'Never Be The Same'. Having parted ways with Fifth Harmony the previous year, it was a new experience for the 21 year old and it's fair to say she's absolutely nailing it so far.

Charli XCX was responsible for one of the most incredible songs and music videos of 2017 with 'Boys'. Having picked up over 75 million views on YouTube and countless streams online, it made sure the world's eyes and ears were firmly fixed on the British star.

At the first show of the 'Reputation' tour in Arizona, Camila and Charli both joined Taylor on stage to sing 'Shake It Off' (as if you couldn't make that song even more incredible).

These are the songs Taylor performed on the opening show of the 'Reputation' tour in Glendale, Arizona:

Here's an album breakdown where you can see reputation, naturally, is getting the most love on this tour:

There's only one song missed off from reputation: So It Goes.

What does Taylor Swift 'Reputation' tour stage look like?

Taylor always goes big on her tour staging and the 'Reputation' tour is no different! Pictures from the first song in Glendale show that the main stage has two wings and is backed by giant, curved screens.

THE STAGE!! OMG! It's huge and so are the b STAGES! @taylorswift13 @taylornation13 #RepTourGlendale pic.twitter.com/CVQnHaxlxT

On arriving at the stadium, fans spotted a B stage and wondered how Tay would get herself over to it during the show. Well, just like on previous tours, Taylor used a flying platform to get herself over there.

SHES FLOATING TO B STAGE LIKE THE ANGEL SHE IS #repTourGlendale pic.twitter.com/dTHSbwH69X

After performing a few songs on the B stage, Taylor hopped in a flying snake (as you do) to get herself back to the main stage. Snakes are a big part of this latest tour, with giant, mechanical ones rising from the staging during the concert.

Something else to note is the VIP areas on the tour - they've been named Club Olivia and Club Meredith after Taylor's two cats!

There is a Club Olivia & Club Meredith!!! Can y'all hear me screaming!!?? #reputationStadiumTour #repTourGlendale pic.twitter.com/hhLvbcBZXB

Ahead of the tour starting, Taylor revealed on her Instagram story that there would be eight (EIGHT!) costume changes during the show. Here's a few of the different looks...

SHE WORE THE RAINBOW DRESS pic.twitter.com/1egrvy3i0h

I LOVE ONE WOMAN pic.twitter.com/rNQ6rDG61N

Some of the outfits were also on display at the entrance to the Rep Room, the place backstage where lucky fans could meet Taylor after the show.

Can I get Taylor Swift meet & greet?

Taylor will be holding meet & greet sessions with fans. She's created a room backstage at her shows that is full of 'reputation' memorabilia. Check out the picture she shared on Instagram recently... 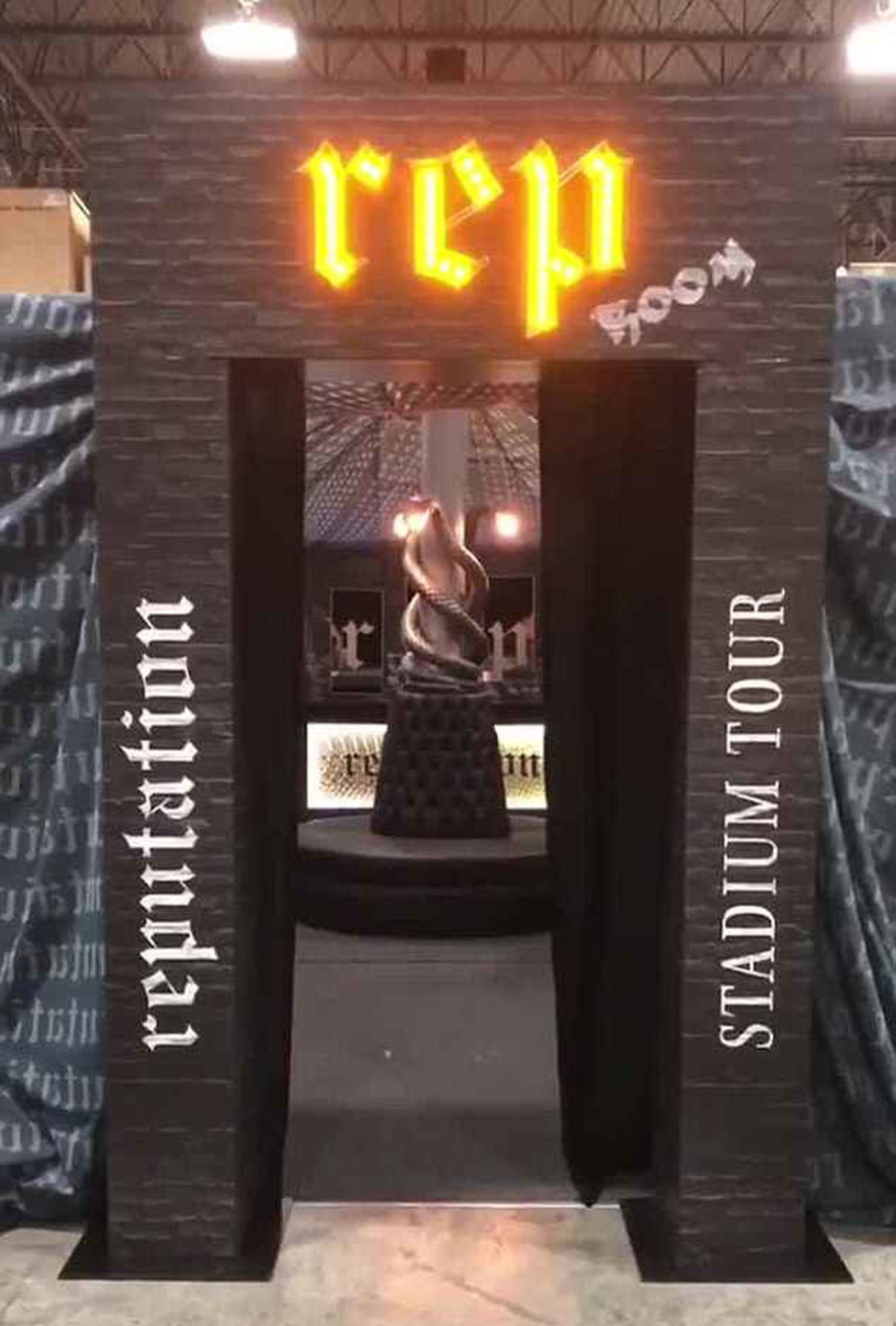 Who wouldn't wanna hang out in there with Taylor - just look at those snakes wrapped around that sofa/sculpture... epic!

'reputation' was Taylor Swift's sixth studio album and marked her first release in three years since 2014's '1989'. The album featured the hit singles '...Read for it?', 'Gorgeous' and 'Look What You Made Me Do'and hit number one in the UK charts!

> Download Our fancy New App For All The Latest Taylor Swift News!

Whilst you're here, check out Taylor's boyfriend Joe Alwyn appreciating her performance at the #CapitalJBB...