MTV VMAs 2014: Watch All The Performances From The AMAZING Show 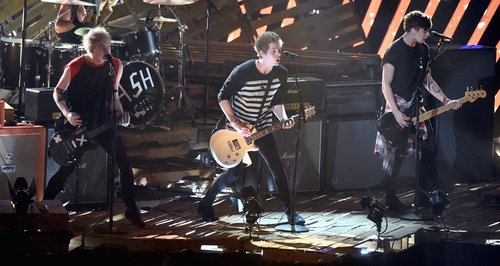 First up... let's start as we mean to go on with the EXPLOSIVE opening performance from trio Jessie J, Ariana Grande and Nicki Minaj. From 'Anaconda' to 'Bang Bang', this was the PERFECT way to start the show (and Nicki's twerking didn't hurt either!).

The UK's very own Sam Smith made good and gave a stand-out performance of 'Stay With Me' when he hit that MTV VMAs 2014 stage. What a VOICE!

Usher & Nicki Minaj - 'She Came To Give It To You'

The man himself, Usher, is well and truly back and brought sexiness, talent... and a certain rapping superstar along with him to the VMAs stage. Sit back and enjoy!

This pair of sexy ladies made sure ALL eyes were on them when they performed their new hit team-up track together at the VMAs, complete with costumes straight from their Kill Bill themed music video.

Adam Levine made sure his hip-shaking moves were on full display when he and Maroon 5 made their VMAs performance debut, bringing out new single 'Maps' to celebrate the track's release... with new album 'V' just around the corner!

Taylor Swift - 'Shake It Off'

'22' superstar Taylor returned last week by surprising us ALL with the release of new track 'Shake It Off', from her next record '1989'. Now Taylor's given us the FULL experience with an energetic live performance of the new single from the huge MTV event.

The 5SOS boys have already had an incredible year so far, from single success to launching their debut album, and the boys celebrated with a fan-pleasing performance of their latest release 'Amnesia'. You done good, boys!

To close out the show, there was only ONE star the people wanted to see, this year's Video Vanguard Award winner Beyonce, strutting her stuff as only 'Yonce' can! She performed EVERY track from her 2013 album in an amazing medley, which you can relive below.

PLUS... let's not forget about the PICTURE-PERFECT moment when Jay-Z presented wife Beyonce the prestigious Video Vanguard Award, complete with young Blue on stage!