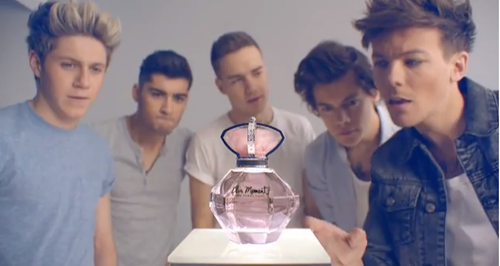 The UK band joke around in a new trailer to promote their new perfume launch.

One Direction have unveiled the brand new advert for their first fragrance Our Moment.

The 'Live While We're Young' five-piece announced their first perfume back in June and launched it in stores this past weekend.

One Direction have now featured in a new TV trailer for the product, that sees them trying out new scenes for the fragrance.

Harry, Liam, Niall, Zayn and Louis are seen smelling things like strawberries and flowers in the trailer, in between scenes of them messing around on the photoshoot.

The fragrance launch comes fresh from the world premiere of their film This Is Us 3D, which launches in cinemas at the end of this week.

The TV advert also features the voice of former X Factor star Diana Vickers singing a cover of the song 'My Favourite Things'.

One Direction also made an appearance at the MTV Video Music Awards where they were presented with the Song Of The Summer for 'Best Song Ever'.

Check out One Direction's brand new TV advert for their fragrance below: