One Direction Vow Not To Split Up: "We're Here For As Long As The Fans Want Us" 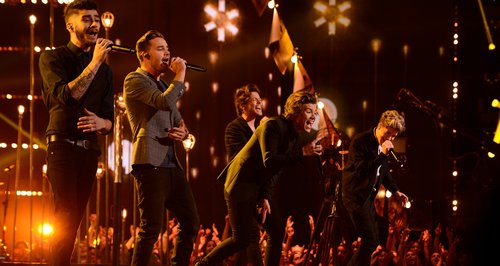 The 'You & I' five-piece say they are fully focused on their new album and have no plans to break-up.

One Direction have declared they will be together for "as long as the fans want us", while addressing the constant break-up rumours they face.

The 'Live While We're Young' five-piece, who kicked off their brand new world tour over the weekend, stay the fact they have a new album in the worlds should help people dismiss the split rumours as fictional.

"We always hear rumours about us splitting, but we're not!" Harry Stylesdeclared to The Sun this week. 'We've already started recording our fourth album.

"The fact we have an album coming should put these rumours to bed," Niall Horan added. "We're here for as long as the fans want us."

The boys have already started writing for their next album, the follow-up to 2013's 'Midnight Memories', which is expected out before the end of 2014.

One Direction launched their 'Where We Are' stadium tour at the weekend with a first show in Bogota, Columbia, and bring it over to UK shores in May.