The One Direction man collided with Aston Villa star Gabriel Agbonlahor as he played for Celtic this weekend.

One Direction's Louis Tomlinson was seen taking part in a charity match for ex-Premier League star Stiliyan Petrov this weekend.

The 'Little Things' got kitted up in a special Celtic shirt, complete with 1D on the back, as he joined legends of the game, celebrities and current stars.

It was an exchange between himself and Aston Villa ace Gabriel Agbonlahor that got everyone talking as the pair came together in a clash.

The boyband star came off worse as he lay on the floor with an injured knee and was even physically sick on the sidelines later in the match.

Other stars who took to the field at Celtic Park included Jamie Redknapp, John Terry and comedian John Bishop.

Check out a picture of Louis in action below: (Picture: Wenn) 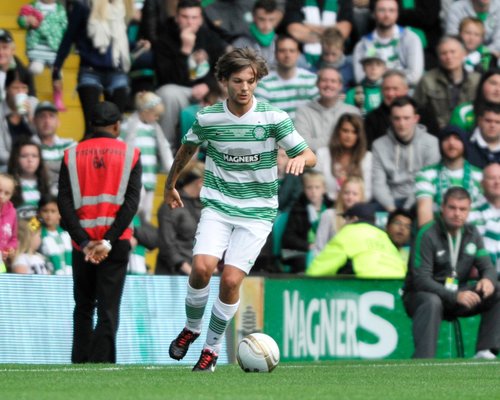 The match was put on in honour of Petrov – who is currently in remission from acute leukaemia – and he received an overwhelming standing ovation from the 60,000 in attendance.

Watch the moment Louis Tomlinson clatters with Gabriel Agbonlahor below:

Meanwhile, Louis will soon be making his debut for Doncaster Rovers after he signed as a non-contract player with the Championship outfit earlier this year.

The singer will play for his hometown on 18th September.

Who Is Love Island's Finley Tapp? Footballer's Age, Instagram, Job, And Everything You Need To Know