Harry Styles is well and truly covered in tattoos- but how many does he have? The 'Golden' singer has a collection of meaningful and arty symbols he's collected from his time in One Direction to his second solo album, but what do they all mean?

Harry Styles has one of the biggest and best known tattoo collections of all stars- but how many tattoos does Harry have?

From his wrist, to his chest to his legs, there's not many parts of the One Direction star that doesn't have some body art on it.

So what do all of Harry's tattoos mean? And how many inkings does he actually have?

How many tattoos does Harry Styles have?

Ever since One Direction hit the big time back in 2010, Harry has been steadily adding to an ever-growing collection of tattoos and inkings, with everything from song lyrics to tongue-in-cheek artwork.

While it's pretty difficult to keep up with Hazza and his love of tattoos (at one point there seemed to be pretty much a new design every month these days), see below for our guide to Harry Styles most well-known tattoos and what they mean.

One of Harry's latest designs, the boy band star got a half-naked mermaid inked onto his left forearm back in November 2014. When asked about the reason behind the tattoo, Harry simply told The Today Show, "because I am a mermaid". OK then, Hazza!

Harry's tattoo of a naval anchor is on his left wrist and is a pretty standard design in the world of tattoo lovers, especially among the old-school sailor crowd! It was done to cover up his old "I can't change" tattoo, and we definitely like this one more than the removed design! 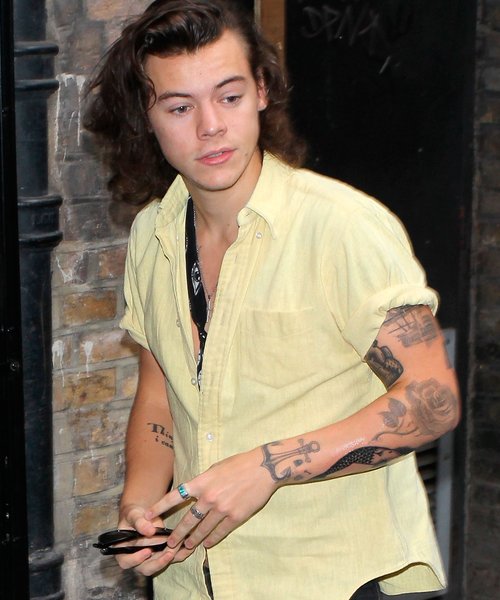 One of Harry's most unique tattoo designs, this one is on his left tricep and depicts a creepy looking skeleton man dressed up in a suit and fedora hat. What does it mean? Your guess is as good as ours!

A symbol of equality, Harry's handshake tattoo basically makes us love him EVEN more. Harry, you keep representin'! 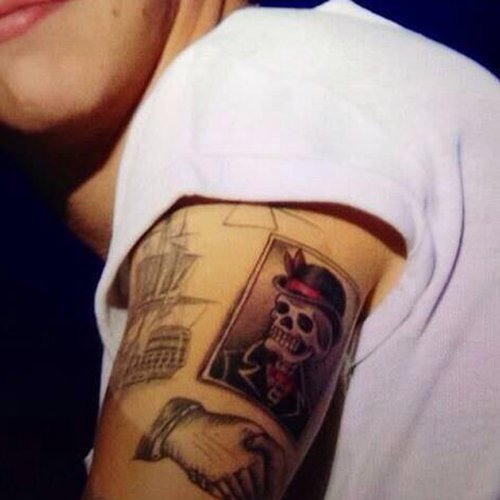 One of Harry's BIGGEST tattoos, the outstretched wings of the butterfly cover up Harry's delectable little torso (which is, admittedly, a shame). Butterflies generally symbolise transformation and change, so perhaps Harry go this to show his evolution from a young boy band star... to a REAL man!

Featured on Harry's left forearm is an inking of the Holy Bible and, while Harry isn't outwardly religious, probably reminds the boy band of his home. The inking also covers up his old lettering of 'things I can't". 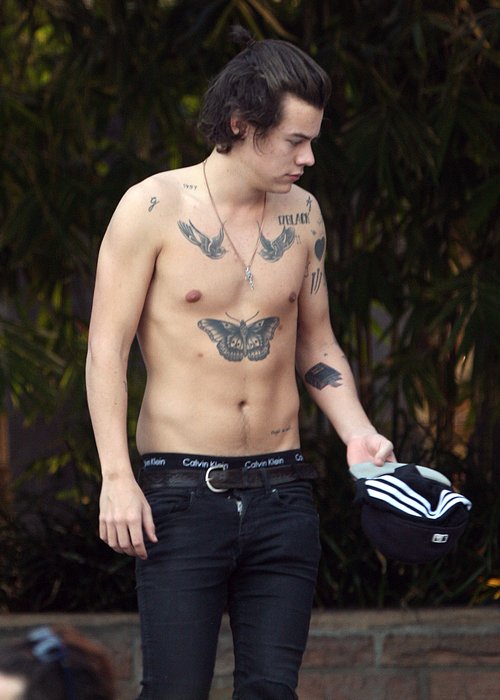 Done way back in July 2012, Harry's most ADORABLE tattoo... a letter 'a' in tribute to his lovely mum Anne Cox! Going for son of the year there, Hazza? 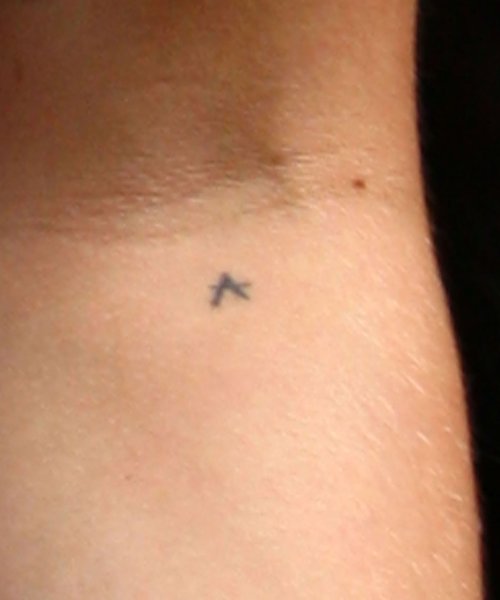 One of the One Direction star's most intricate designs is his traditional naval ship on his left bicep. While MANY fans speculated this was inked about ex-girlfriend Taylor Swift (after the man in her 'I Knew You Were Trouble' video had a very similar design), Harry insists its all about reminding him of travelling homeward when he's off on his trips around the globe.

Back in December 2012, Harry had this heavy design inked onto his left bicep. While many think it's all about reminding him of his family back home, we reckon it's just a simple pun on wearing your heart on your sleeve! 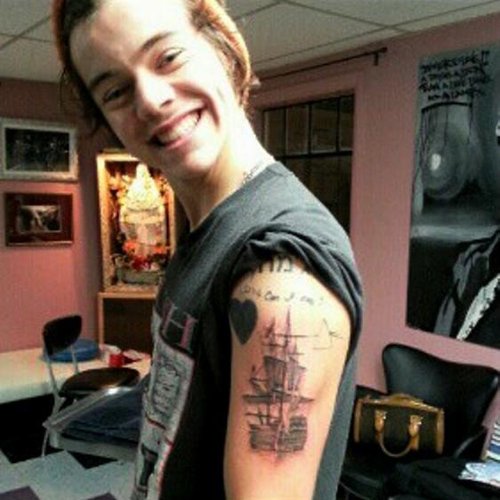 On the left of Harry's rib cage Harry has another large design of a birdcage. Could this be a reference to feeling caged in by the press and his life in One Direction. Or is it another pun from Mr. Styles?

Another tattoo on Harry's left side is this old-school design of classical theatre masks, showing just how dedicated Harry is to his job of entertaining people!

The letters 'SMCL' have also never been addressed, but fans have suggested it stands for Simon Cowell, the man, the myth, the legend, that put the boys together on X Factor. 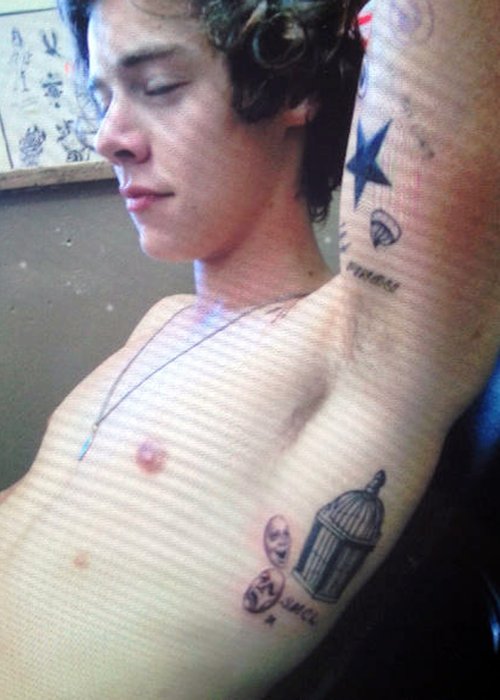 A classical tattoo that, for Harry, represents travelling and being out on the road all the time... but always finding your way home. Harry LOVES these sailor type tattoos, doesn't he? 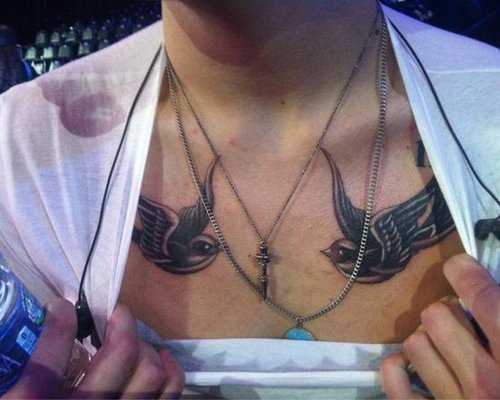 One of Mr. Styles. more risque tattoos are the fern leaf designs on his left and right hips which CANNOT help but draw attention to the boy band star's pelvis. It's rarely spotted, but in his incredible album artwork shot by Tim Walker, the fern is out in all of its glory. 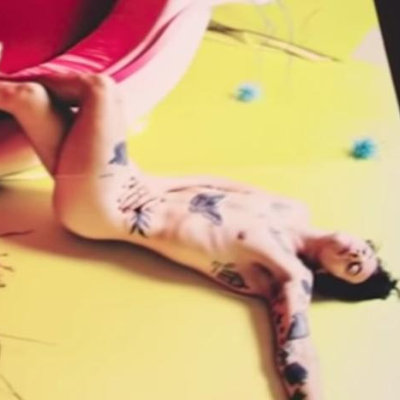 Back in 2012 Harry had his older sister's name Gemma tattooed in Hebrew onto his shoulder. Another inking in tribute to his family and showing just how close he is to them. 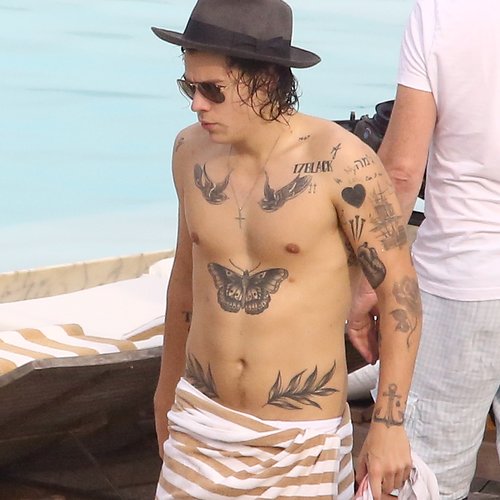 He's never explained the appearance of three pretty ominous black nails on his arm, but they've been lurking there ever since 2013.. so, Haz, care to explain what's going on there?

While this is traditionally a religious symbol, he has the pretty small ink in comparison to his others marked on his hand, like fellow pop star, Justin Bieber. 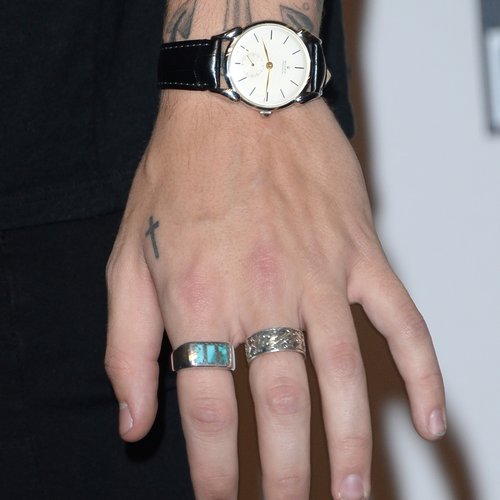 While out in Rio De Janeiro Harry REPORTEDLY got this number on his cute little derriere. It's still not been confirmed whether it's real or not, because Harry's a good boy who doesn't whip his bum out much! 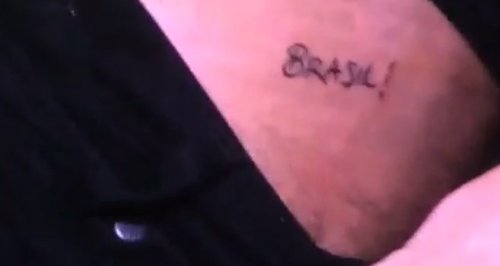 Keep it Capital every time the rumour mill strikes about a new Harry Styles tattoo as we'll bring you up-to-date pictures and the rundown on what they all mean. 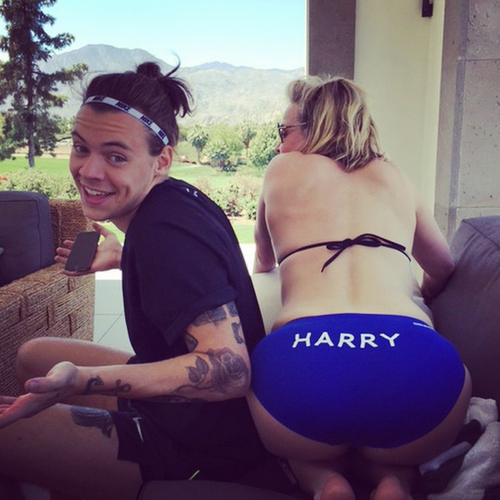 When Harry & Chelsea posed for this snap, everyone was pretty focused on the choice of bikini bottoms as opposed to Harry's left thigh... however upon closer inspection fans noticed a new design emblazoned on the 'Kiwi' star's leg!

Let's take a second to remember how awkward Harry Styles made Roman's date!