The 'Dance With Me Tonight' singer also congratulates Ben Howard after losing out in the British Male Solo Artist category.

Olly Murs has revealed he had to do "a Rihanna" and take the tube to London's O2 Arena for the BRIT Awards 2013 last night (20th February).

The 'Heart Skips A Beat' singer said he wanted to escape the queueing traffic in the capital by heading to the venue via public transport.

"That was bonkers!! Did a Rihanna tonight and got the tube to the @BRITAwards the traffic was NUTS!! #nowneedatoilet," he revealed to fans on his Twitter account.

The Bajan star famously rode the tube to attend her 'Loud' tour gig in London back in 2011.

The singer arrived in good time and was in high spirits as he chatted on the red carpet of the ceremony.

He told Capital that it's "always a pleasure" to come to the ceremony and was hoping to take home a prize after scooping two nominations.

Check out a picture of Olly Murs and Calvin Harris hanging out together at London's O2 Arena last night below: 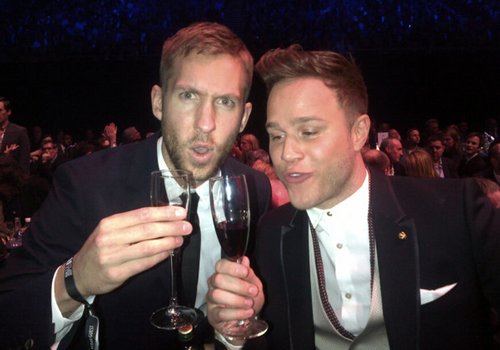 He lost out to Adele in the Best British Single category and to Ben Howard for British Male Solo Artist.

"I'd be lying if I said I wasn't gutted!! Big up to Ben Howard!! Well done," he wrote on his Twitter account later in the evening.

Ed Sheeran also told Capital that Olly "deserves to be recognised" for all of his success since he was a contestant on the X Factor.

Ben Howard took home a total of two prizes on the night and was among the stars performing on stage.