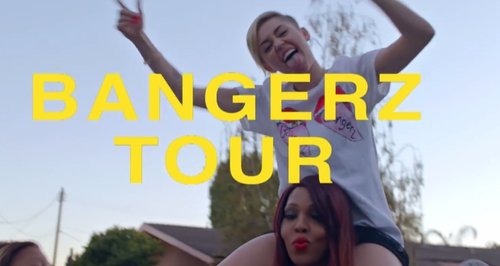 The 'Wrecking Ball' star's stage outfits are set to made a big impact judging from fresh previews of her looks.

Miley Cyrus fans have been treated to a sneak preview of what to expect on her 'Bangerz' tour after designer Roberto Cavalli's sketches for her stage costumes were revealed.

The 'Adore You' star heads out on tour next month to support her latest studio album, and fans are in for a treat judging by the risqué outfits featured the Italian designer's plans for the costumes.

Among the outfits seen in the this sneak peak are several catsuits, including a flesh-coloured one featuring silver jewels to cover the US star's modesty, as well as various tiny denim hot pants and leopard print pieces (Credit: Purple PR/Roberto Cavalli):

> Get voting for Miley to win #BestFans2014 and check out 15 ways you know you're one of the #Smilers!

Roberto Cavalli has previously worked on touring outfits for stars like Beyonce and Cheryl Cole.

The collaboration with Roberto comes fresh from another fashion collaboration for Miley, after she was named the new face of Marc Jacobs' Spring/Summer campaign.

It seems like Miley herself can't wait to head out on the road later this year, with the 'We Can't Stop' star tweeting the following:

I can't wait to be on tourrrrrrrrrrr

Miley Cyrus kicks off the 'Bangerz' world tour in Vancouver on 14th February before bringing it over to the UK from 6th May starting with a show in London.