280 Movie Clips Have Been Mashed Together To Make The Best 'Uptown Funk' Cover... EVER! 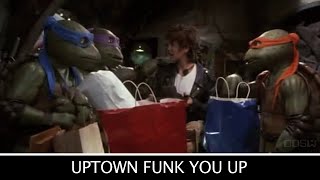 Uptown Funk Sung by the Movies

One keen YouTuber has taken parts of your favourite films to create one EPIC cover of Mark Ronson's former Big Top 40 no. 1.

One dedicated YouTuber has spent THREE MONTHS trawling through almost 300 films to create one of the BIGGEST mash-ups we've ever seen!

DondraperSaysWhat took lines from The Hangover, Austin Powers, American Pie and even Back To The Future and matched them perfectly to Mark Ronson & Bruno Mars' chart topping hit from earlier this year.

Hit play on the video above and be amazed at just how much time some people have on their hands!

Mark Ronson's huge hit 'Uptown Funk' spent a record breaking 7 weeks at the top of the Vodafone Big Top 40, including bagging the coveted Christmas No.1!