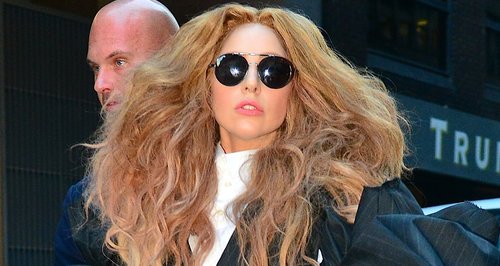 The 'You & I' star performed a theatrical retelling of the film during her Good Morning America appearance.

Lady Gaga gave her own interpretation of the classic film Wizard Of Oz earlier today (9th September) on Good Morning America for her performance of new single 'Applause'.

The 'Marry The Night' singer kicked off her highly anticipated performance dressed up as Dorothy and holding her dog Fozzy in a wicker basket, in a nod to the film's canine character Toto.

Surrounded by dancers dressed up as Dorothy's famous companions the Cowardly Lion, the Tin Man and the Scarecrow, Gaga began her performance with an a cappella version of 'Somewhere Over The Rainbow'.

The US star then launched straight into new song 'Applause' while running down a yellow brick road on the Good Morning America stage, being joined by dancers dressed up as various characters from the Wizard Of Oz including villains the flying monkeys and the Wicked Witch.

Gaga went through several costume changes during the performance as she changed into a pink dress and wang to portray Glinda the Good Witch, before temporarily wearing the Wicked Witch's green wig and finishing the performance in another Dorothy-inspired outfit.

Watch Lady Gaga's Wizard Of Oz themed performance of 'Applause' on GMA below:

Lady Gaga is due to release new album 'ARTPOP' on 11th November.