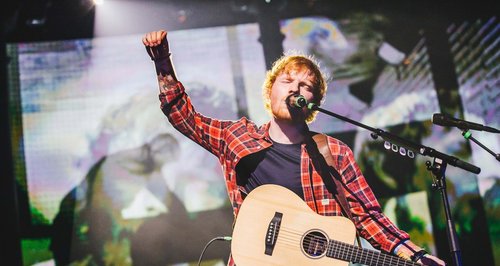 Ed Sheeran talks exclusively to Capital about why he wouldn’t want to be an X Factor judge just yet and about writing for One Direction.

Ed Sheeran has pretty much achieved every accolade in the music industry at the age of 23 – well, how many other people can say they have had a number one song in 64 countries at the same time – but the humble singer doesn’t think he would be ready to judge other music hopefuls.

Max quizzed Ed on whether he could see himself on the panel of a show like the X Factor. He admitted, “I don’t know, I’d do the judges houses or something but I don’t know if I could ever be – yet – the person who sits behind a buzzer and tells you whether you can make it or not.”

“Just because I find it a bit odd, me being a 23-year-old. I did The Voice in LA with Christina Aguilera and I was telling people twice my age how to sing and I found that really weird. Because I was like ‘I haven’t been doing it as long as you so, actually, you probably know more than me’. So I think until I’m at a stage where you’re Louis Walsh and you’ve been in the industry for like 20, 30 years… I would listen to his opinion.”

And while he won’t be volunteering to be a judge any time soon, Ed has been keeping himself busy with, well, pretty much with being one of the world’s biggest pop stars and writing for a little band called One Direction.

Ed penned a song for the boys next album and told Max what we can expect. He said, “I got a text today saying it’s definitely on the album. I wrote it in a hotel room in Cologne and I wrote it specifically for them.”

“It’s the first time I’ve done that, so it’s a One Direction song rather than a ‘me’ song that they record. It’s kind of a little bit of everything, it is ballad-y but it is up-tempo at the same time. I wrote it by myself and I first played it to Simon Cowell and he really liked it and then they all heard it and vocalled it.”

We can NOT wait to hear it!