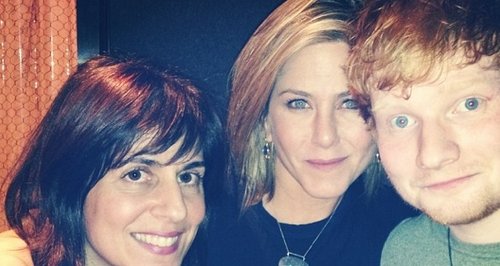 The 'Give Me Love' star is snapped with the Friends actress over the festive holiday.

A picture of the pair together was posted by the Hollywood star's manager Aleen Keshishian on Instagram this week.

"'Happythanksgiving #jenniferaniston @aleenkeshishian #edsheeran,'" she wrote in a caption to accompany the shot.

Earlier this month, Ed was also seen hanging out with Courtney Cox after revealing the actress lets him stay in her beach house.

Meanwhile, Ed is taking a break from his own social media channels he revealed recently as he looks to continue work on his new album.

He's worked with the likes of Rick Rubin and Pharrell and has performed a couple of new tracks during shows at Madison Square Garden.