Luke’s ex, Arzaylea, went on a rant about the 5 Seconds of Summer star.

Breaking up is never easy, but at least most people’s break ups don’t get aired in front of millions of fans, unlike Luke Hemmings & his ex, Arzaylea, after she went on a tirade against the 5SOS star on Instagram.

The couple parted ways around May, and fans have rallied round Luke after Arzaylea claimed this weekend that he had cheated on her, used drugs and accused the band of being racist and homophobic.

Commenting on a picture Luke had posted of himself with the caption “2fast4u”, Arzaylea replied, “Yeah you always did finish fast. Is that why he was still f***ing me the NIGHT before he went out with another girl? Y'all need to realize none of these guys are perfect. I'm over being the one in trouble lmao. 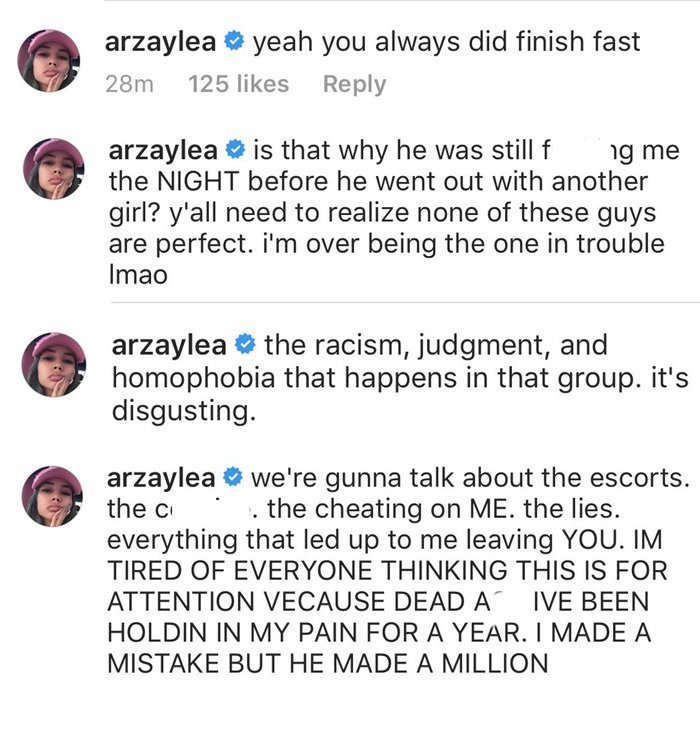 “'The racism, judgment, and homophobia that happens in that group. It's disgusting. We’re gunna talk about the escorts. The [drugs]. The cheating on ME. The lies. Everything that led up to me leaving YOU.

“IM TIRED OF EVERYONE THINKING THIS IS FOR ATTENTION BECAUSE DEAD A** IVE BEEN HOLDIN IN MY PAIN FOR A YEAR. I MADE A MISTAKE BUT HE MADE A MILLION.”

Fans were quick to defend Luke amid claims that the couple ha actually split because Arzaylea had been the one who had cheated on him with musician Blackbear.

me: i hate drama
arzaylea: *comments luke's pic on ig*
me: pic.twitter.com/6VRGT7gEhG

@Luke5SOS, were always going to believe you Luke, don't listen to arzaylea, she just wants attention. We love you Luke! #weloveyouluke

so did arzaylea cheat on luke first or was it the other way round pic.twitter.com/zYlihXKlez

She should handle this privately, and if she wants everyone to know about it she should make a video with Luke releasing all the negativity.

when luke hemmings and arzaylea drama has been gone for 4 months and then comes back so quickly pic.twitter.com/fgVy00OM2q

Yikes, this all sounds like it got a little messy!

> Get On Our App To Keep Up With The Latest Celeb Gossip, As It Happens!