So. Many. Muscles! Zac and Dwayne Johnson shared some behind the scenes snaps from their latest filming project.

Here's something to brighten you Tuesday morning - Zac Efron and Dwayne 'The Rock' Johnson have started filming for a new Baywatch movie... and they shared some behind the scenes snaps of the action, too!

Zac and Dwayne both posted photos on Instagram - and it's got us seriously hyped for the movie after seeing all that tan and all those muscles! Now these are lifeguards we could SERIOUSLY get on board with!

Mr Efron posted about his first day "protecting the bay" - (and gave away a few of the green screen secrets at the same time) - as he posed with The Rock in a convertible:

First day protecting the bay is a wrap. Thanks to the big guy (Dwayne). Stay tuned. More adventures lie ahead. #speedoready #baywatch

Dwayne also posted a pic of the pair of them in their lifeguarding outfits, telling his followers, "EXCLUSIVE FIRST LOOK: #BAYWATCH Day 1. My character 'Mitch Buchannon' just gave @zacefron's character 'Matt Brody' the all important beach speech about what it means to have manly 'Alpha balls'.

"Zac's ad-libbed responses were brilliant! Talented and great dude. World get ready to have some fun, 'cause the beach will never be the same again. #OnSet #BAYWATCH #Day1#AlphaBalls#NowWhoNeedsMouthToMouth?" 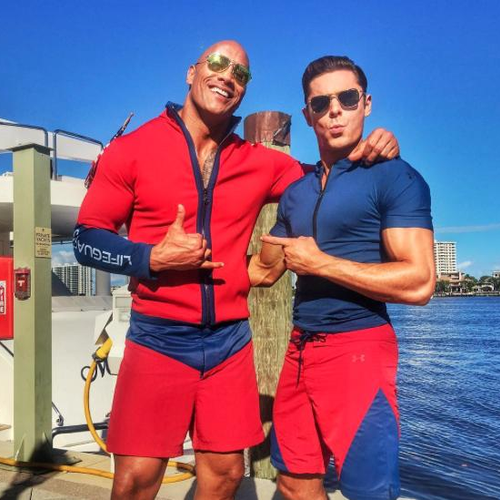 The movie will be an adaptation of the hit TV series, which ran from 1989 to 2001 and starred David Hasselhoff along with Pamela Anderson. The Paramount production has reportedly been in negotiations for some years, and has finally gone into production, directed by Seth Gordon.

The story follows Dwayne's character, a veteran lifeguard who is forced to team up with a younger lifeguard (aka Zac) to save the beach from an environmental disaster according to reports from The Wrap.

In addition to Zac, The Rock also took to Twitter at the time to tease just WHAT exactly we can expect from the movie:

Shirtless heaven and bikini dreams. And some good ol' fashion "this is my beach bitch" RATED R humor. #BAYWATCH https://t.co/0PMv3lzYCO

Yep, we're already counting down the days - and let's hope they keep giving us more of these photos too!