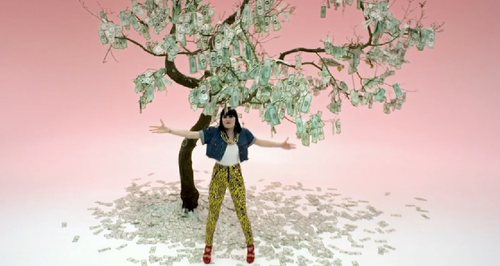 To celebrate our Cash In With Capital competition, we're taking a look at the best songs written about the rich, poor and famous.

Popstars seem to be obsessed with money; whether they want more of it, none of it or telling us how they behave with it.

To celebrate our Cash In With Capital competition this month, we've looked at eight songs that talk about the green stuff below.

Sam Smith - 'Money On My Mind'

The singer may be claiming money is the last thing on his mind, but given the song topped the charts earlier this year, we're guessing he's not short on dosh these days.

The group asked their lazy boyfriends to pay up in 'Bills Bills Bills', with Beyoncé complaining that even her credit card had been maxed-out. Something tells us she doesn't have such issues with Jay Z.

The singer hits out at the money-obsessed in 'Price Tag', insisting she just wants to make the world dance. Does this mean we can score some free tickets to her next gig?

Aloe Blacc - 'I Need A Dollar'

The soul star remembers the time when he lost his job on his 2010 hit, though given his recent success with 'The Man' and Avicii's 'Wake Me Up', it was probably the best thing that could have happened to him.

She may be flying first class and dripping in diamonds these days, but Fergie claims she's still partial to the occasional takeaway on 'Glamourous'.

Even in the early days of her fame, Lady Gaga was enjoying the high life on 'Beautiful, Dirty, Rich'.

The pair dreamed of being billionaires back on their 2010 single; and we have a sneaking suspicion about which of the two is closer to their dream these days.

After more than ten years in the game it's hardly surprising that Rihanna's not short of a bob or two, though she remains intent on telling us just how rich she is on 'Pour It Up'.