WATCH: This Amazing iPad Magician On Ellen DeGeneres Will BLOW YOUR MIND! 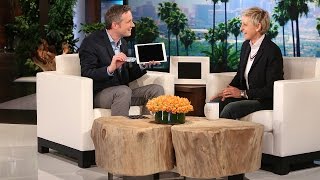 How does he do it?! This magician makes objects appear out of thin air using just an iPad – we can NOT work it out!

With most magicians you can get an inkling of how they do their tricks just by watching closely – but we are TOTALLY BAFFLED by this guy!

Simon Pierro was a guest on the Ellen DeGeneres show last week and totally astounded the audience when he appeared to take solid items straight off the screen of his iPad – including a photo he had just taken with some members of the audience!

We reckon Simon’s mad skillz and the fact that he uses an iPad and FaceTime in his at make him even more unique. Is this the most impressive magic show you’ve ever seen or what?!