Why would they cut this?!

BTW, there are spoilers in this article.

'Stranger Things' has everything you need in a television series. Love, comedy, massive spider-nightmare monsters that dwarf an entire town. Seriously, what's not to love?

> You Know We Have A Tonne Of 'Stranger Things'... Things For You On Our App Right?!

Well, we can actually think of one thing.

If you're an avid fan of the series then you'll know that Eleven is undeniably one of the most loved characters along with her on screen father figure Hopper.

Their journey concludes with Hopper taking Eleven, a.k.a Jane to the local school's end of year prom. However, one fan spotted an image of the character wearing a tie in a candid behind the scenes shot which didn't end up in the final episode.

How did the fan solve the mystery? Tweeted the actor David Harbour of course! 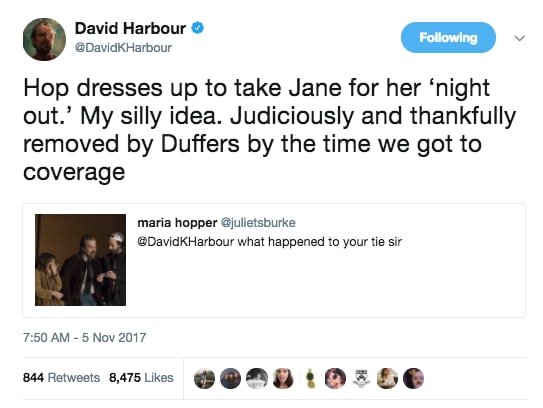 We're just putting it out there. We think it would be adorbs af if the creators of 'Stranger Things' had actually left this in!

But then again, the Duffer Brothers probably know what they're doing when it comes to creating top quality story-telling. We'll just be over here re-watching the whole season again.