We can’t deal with more of our faves leaving the show!

Yep, we might be losing the likes of Aaron Chalmers, Gary Beadle AND Marty McKenna from the show.

Aaron Chalmers, the tattooed hunk who is famous for his on/off relationship with Marnie Simpson on the show has hinted that he will be leaving the show as he wants to concentrate on his career as an MMA fighter instead.

Fans saw him leave the show temporarily to train for his first fight, and after winning his second fight in a row, Aaron told the Daily Mail, “Geordie Shore is my job, that's what has made us, but obviously I'm 30 now and I have a girlfriend, so maybe it's my time to step out of Geordie Shore and let somebody younger come in.

“I've done what I need to do on there. You have to understand the show doesn't grow old, but we do. Six years ago it was fun, but we're getting older. The audience is getting younger and we're getting older. I'm very grateful for everything that has happened. Geordie Shore has given us the opportunity to do what I'm doing now.

“When I first started Geordie Shore, I never thought I would be on the billboard to fight at Wembley. It's all a bit surreal still.”

It comes as Marty McKenna also went on a tweet and delete spree over the weekend, claiming that he ha been sacked from the show but everyone else had found out before him. 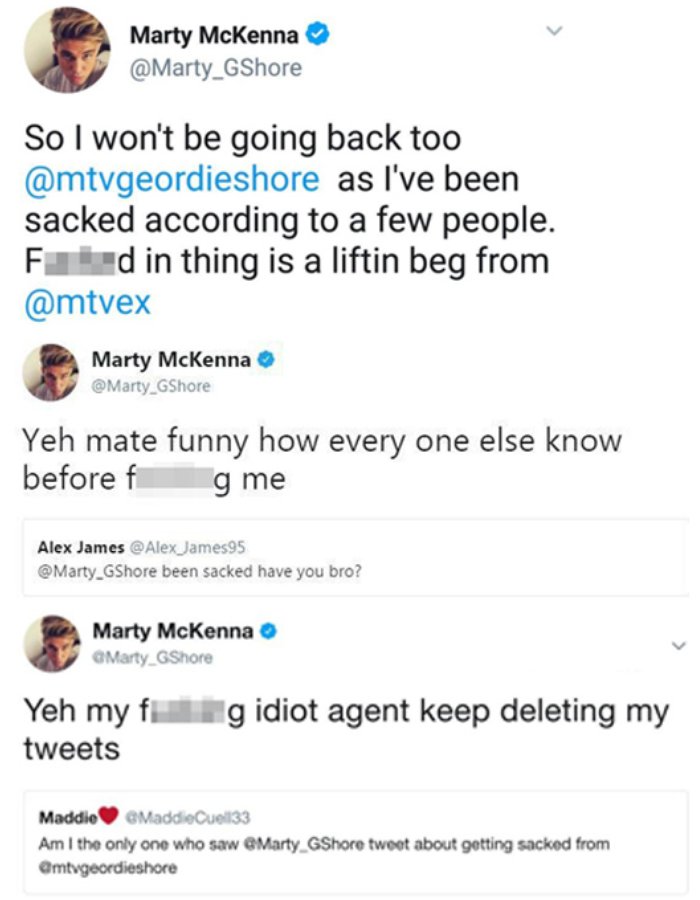 He posted, “So I won't be going back to @mtvgeordieshore as I've been sacked according to a few people. F**king in thing is a liftin beg from @mtvex. Yeah mate funny how everyone else know before f**king me.”

It’s not the first time Marty has been in trouble with Geordie Shore bosses – he and Scotty T were both removed from the house back in May and banned from being on the summer special because of their bad behaviour.

A source said at the time, “Marty is just as bad if not worse than Scotty. He parties hard and it can get too much at times. He didn't fly out to Italy with the cast as producers had already made their minds up and knew he wouldn't be continuing for the rest of the series."

Although it looks like Marty might not be out just yet as he later tweeted about changing his password suggesting he might have been hacked and someone else posted the tweets on his behalf.

All of this comes right after Gaz Beadle’s future on the show came into question after he announced the happy news that he is about to become a dad. Despite the star being yet to make an announcement about whether or not he will return for the next series, fans and his castmates alike think that he might decide to hang up his pulling pants.

Here’s hoping the full cast will still be around for the next series at least – we can’t face losing three of our fave Geordies at the same time!

Head over to the Capital app for all the latest news on your fave stars and some HUGE hits too!