Watch Your Step, Ariana Grande! 10 Of The Best Stage Falls The Stars Would Rather Forget 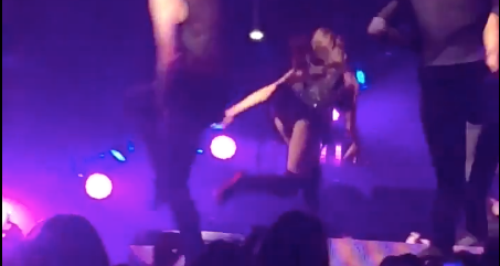 No celeb is immune to falling over on stage, from Iggy Azalea to One Direction's Liam Payne - check out all the MUST SEE videos of the best stage falls.

Being a pop star is definitely a risky business, as these unlucky celebs have found out…

Ari took a tumble while performing on her tour - and apparently tripping over a part of the set mid-song! Ariana was performing 'Bang Bang' on one of her Canadian dates when she ran toward the back of the stage and tripped over an elevated part, landing on her knees. She styled it out pretty well, but one eagle-eyed fan managed to catch it all on camera.

Poor old Madge nearly did herself a SERIOUS mischief at the 2015 BRIT Awards when he got dragged off the stage during her performance. She had been wearing a cape which was meant to be ripped off in one smooth movement by her dancers - but it failed to undo and they ended up dragging her backwards down three steps by her neck. Ouch! Being the true professional that she is, Madonna was straight up other feet and carried on as if nothing had happened.

Iggy Azalea is the latest celeb to fall victim to the curse of the stage fall, with her spectacular disappearing act during a performance of  'Fancy' at an MTV VMA benefit concert at The Avalon, Los Angeles over the weekend.

Iggy managed to miss her step as she strutted backwards on stage - strutting a little too far and right off the edge of the stage! Proving that she is nothing if not a trooper, Iggy carried on her performance with Charli XCX as if nothing had ever happened.

Iggy posted the footage on Instagram, saying, " Sorry but it would be a crime not to share this with you all, I know I laughed. #StillFinishedtheSongTho #KeptOnRapping #TheShowMustGoOn".

4. Liam Payne from One Direction

One Direction's Liam Payne also suffered an embarrassing moment live on stage, as the 'Midnight Memories' star took a tumble at Croke Park in Dublin during the band's 'Where We Are' stadium tour show.The footage shows the chart-topping star slip, falling on his back during a performance of 'Best Song Ever'. Zayn Malik was quick to offer a hand, but it looks like the only damage was to Liam's ego rather than his lovely bod. Phew!

The trouble with wearing your clothes and shoes too big and baggy is that they occasionally become a bit of a health hazard - namely when Justin's shoe fell off during a performance in front of thousands of screaming fans and he took a little stumble. That's the quickest we've ever seen anyone whip a shoe back on, though!

Back in 2011, Mother Monster fell off her piano during a Monster Ball Tour date in America - but Lady Gaga didn't let the fall put her off her stride, she carried on with her song from under the piano and was up on her feet seconds later. It takes more than a little fall to keep the Gaga down!

Ed Sheeran took a tumble back in 2013 when he attempted to jump from one speaker to another mid-performance. He missed his footing and kinda face planted the stage, but styled it out in EPIC fashion with a little forward roll. Yet another reason we LOVE Ed!

8. Connor Ball from The Vamps

Imagine the scene, it's your biggest concert to date (supporting Taylor Swift at London's O2 Arena) and you get so excited you actually drop off the end of the stage. Connor Ball did exactly that in February this year as he literally disappeared mid-song - but he later tweeted to reassure fans he hadn't been seriously hurt in the fall.

Sweet, no broken arm and got my wallet back, this day has turned into a good day! Need sleep now...

It's the stage fall that has haunted him for a LOOOOONG time but Olly Murs trip down the stairs during a performance in 2010 looks like someone replaced the stairs with a slide. Smooth!

Pink's tumble while performing 'So What' in 2010 actually looks properly painful! The star took a drop from the stage in Germany while wearing a metal harness, and although she was clearly in a lot of pain, even apologised to the audience for the break in the performance. What a trooper!

> Yikes! Check out the 14 unluckiest moments in pop history!