Ed Sheeran had the comeback to end all comebacks after returning to the charts with his mega-hit of an album, ‘Equals’.

The 30-year-old pop icon took to The O2 arena stage to round off Capital's Jingle Bell Ball with Barclaycard weekend on Sunday night – what a way to close!

All 16,000 fans were singing along to Sheeran tracks that dominated the summer, from ‘Shivers’ to ‘Bad Habits’ – it’s safe to say he brought the good vibes in abundance!

The hitmaker gave a 12-strong set and even brought out fellow baller Anne-Marie, performing the ultimate nostalgia anthem, ‘2002’.

Fans were treated to bops old and new in the ultimate closing set, check out all the Ed Sheeran X JBB content below!

WATCH: Ed Sheeran opens his electric set at the JBB with 'Bloodstream'

WATCH: Ed Sheeran brought nostalgia to The O2 with 'Castle On The Hill'

WATCH: Ed Sheeran had everyone singing along to his legendary hit 'Shape Of You'

WATCH: Ed Sheeran and Anne-Marie gave the performance of a lifetime with '2002'

WATCH: Ed Sheeran gave us all the festive feels with a performance of his Elton John collab 'Merry Christmas'

Ed Sheeran gave an unforgettable performance during his mammoth set at Capital's Jingle Bell Ball with Barclaycard on Sunday, December 12 at The O2 Arena. 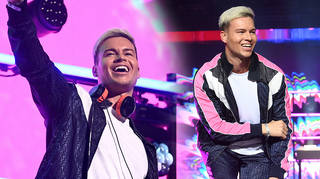