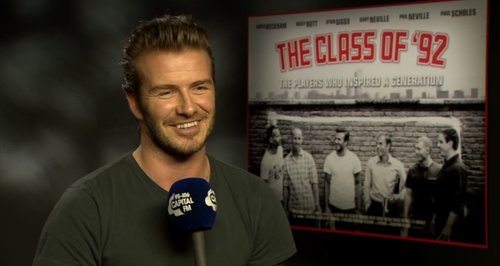 The former England star shows off his tambourine skills as he chats to Max.

The ex-England football star spoke to Max about new film The Class Of '92 and revealed his sons will be heading to watch the action at London's O2 Arena next week.

The former Manchester United, Real Madrid and LA Galaxy star picked up a tambourine and played along with Max to try and earn a spot.

David admitted he was channeling Oasis and The Stone Roses with his skills as Max played the kazoo.

The Class Of 92 also stars David's former United teammates Ryan Giggs, Nicky Butt, Paul Scholes and the Neville Brothers Gary and Phil and is released in the UK on 1st December.

Listen to Max live on Capital every Sunday from 7pm straight after the Vodafone Big Top 40.