From Nicole Scherzinger revealing her 'break-up' with Ed Sheeran to Liam Payne transforming into Louis Tomlinson. These really are the BEST celebrity Dubsmashes of all time!

If you've yet to discover the Dubsmash app then you are in for a SERIOUS treat. In what is essentially organised lip syncing, the Dubsmash app allows you to mime along to your favourite songs, lines from movies and television shows as well as all kinds of Internet Vine goodness.

The app has celebrities from Liam Payne, Kendall Jenner, Hugh Jackman, Demi Lovato and many more addicted. So we've chosen the very best from the world of pop for you to enjoy!

>> WATCH: Nick Young Serenades Iggy Azalea With ‘Sugar’ – As She Gets Down And Dirty!

After facing a string of rumours she was dating Ed Sheeran, Nicole chose Dubsmash to dispel them! The singer performed a lip-sync of Ed's hit 'Thinking Out Loud' - captioning the post that she and the red-haired superstar had 'broke up today'. Oh Nicole, you tease!

“#TotesEmosh (Totally Emotional) that @teddysphotos and I broke up today #OrangeIsntTheNewBlackAnymore #ScherzyLosesItAfterSheeranBreakUp #NoMoreSheerzinger,” Nicole wrote along side the AMAZING lip-sync. We have a sneaky feeling she was joking

This particular Dubsmash from One Direction's Liam Payne will blow your mind! It's Liam, doing Louis - on Niall... Yep, sounds confusing and it is!

Welcome to the best app of all time.

Cara shows off her rap skills as she lip sync's to Cam'ron's 'Hey Ma'... and her timing is spot on!

Who doesn't know all the words to Shrek?! Fifth Harmony's Camila certainly does as she slays this famous scene from the movie.

This homage to her BFF makes us wish Kendall Jenner was our best friend!

Jennifer Lopez makes this scene from Scott Pilgrim vs. the World look like it was made for her.

And another one... #dubsmash #funtimes @1maryphillips

Possibly our favourite Dubsmash of all is this video of Reese Witherspoon and Sophia Vergara on the set of Hot Pursuit miming to Taylor Swift, with a hilarious twist.

Looking smoking with her red lippy, Demi wears her best serious face as she channels her inner Nemo.

We eat sushi and then quote Finding Nemo.....

RiRi has serious fun lip-syncing in a series of Dubsmashes hanging out with her friends.

There have been so many classic Kardashian TV one liners, we're not surprised Kylie Jenner picked this famous Kim Kardashian scene to recreate in her latest Dubsmash.

lol Kim is just me

>> Aww, Ellie Goulding Sings Boyfriend Dougie Poynter's McFly Hit 'It's All About You' In Instaoke 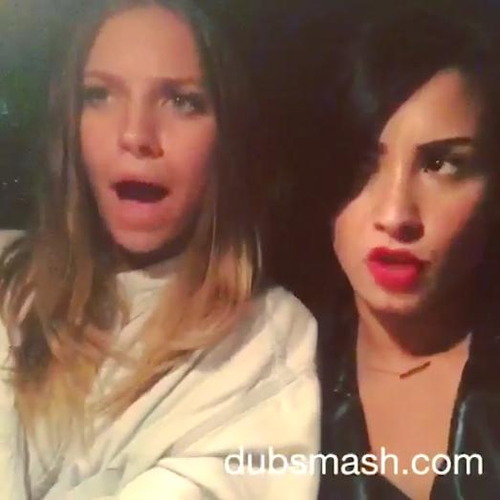