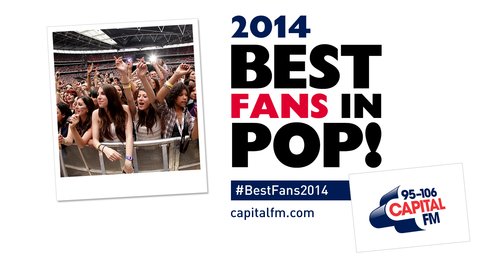 The shortlist of the 20 most influential music communities in pop is set to be revealed this Friday (January 10th).

This Friday (January 10th) we kick off the search for the 'Best Fans Of 2014', as our shortlist of the 20 most influential music communities in pop are revealed.

1D's #Directioners stole the top spot in the final hours of voting back in 2013, pushing Cheryl Cole's #Soldiers into second place, but who will take the crown for 2014?

Could the wild antics of Miley Cyrus secure her this year's crown, maybe the return of Justin Timberlake last year will put him into pole position, or can One Direction's global domination make them victorious for a second year?

You have until Thursday January 9th at midnight to help influence the shortlist by tweeting your favourite act @CapitalOfficial #BestFans2014. Voting then opens on Friday January 10th at 4pm, with the winners being revealed during the Capital Breakfast show on Friday 24th January.

Ready to make sure your favourite artist comes out on top? Make some noise! #BestFans2014