Bella Hadid Calls Paps "Sick, Sad & F***ed Up" As They Invasively Photograph Her Inside Her New York Home

She is not here for the pap shots.

Ever since Bella Hadid became single after her break up from The Weeknd, she’s been the centre of dating rumours and most recently, she’s been rumoured to be hooking up with male model, Jordan Barrett.

It comes after the two models were photographed together in Bella’s New York City apartment.

The pair were seen taking selfies and just chilling out on the sofa and ever since the photos surfaced online, people have been debating whether the pair are dating. She soon confirmed that they're just pals.

J is like a brother to me buhhh this just ruined the surprise ... interview w/ @DerekBlasberg coming soon https://t.co/5lJSNYqMHN

However, Bella isn’t best pleased that the photos got taken in the first place. 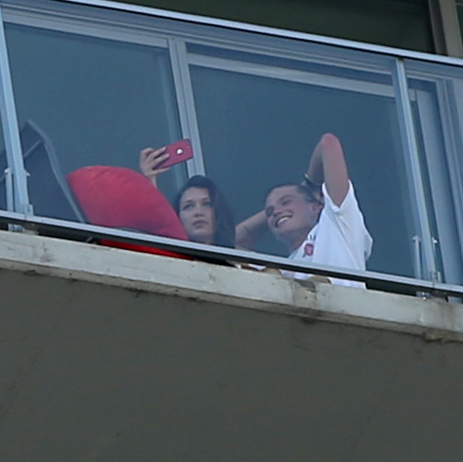 She has since taken to Twitter to not only clarify that Jordan is “like a brother to her” but also that she is really unimpressed that someone took the photos in the first place. “Whoever thinks it’s OK to photograph into someones home and private space is straight up sick, sad, f***ed up” before finishing off her rant with “time to move”.

On another note-whoever thinks it's OK to photograph into someones home &private space is straight up sick, sad&fucked up. time to move

P.S. Bella totally knows all the words to Drake... and proves in a bit of an epic lip-sync session...