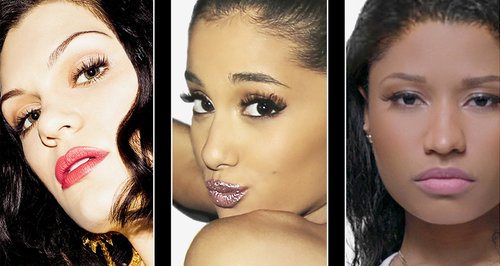 The UK superstar is confirmed to open the big night with her FIRST live performance of 'Bang Bang'.

Jessie J, Ariana Grande and Nicki Minaj have been announced as the first performers who will take to the stage for the MTV Video Music Awards 2014 this weekend.

It was announced today (20th August) that he trio will be performing their team-up single for the very first time together on the VMAs stage Sunday, on a bill also featuring the likes of Taylor Swift and Beyonce.

"When I say that this performance is a dream come true for me, I truly mean it," Jessie said following the announcement. "And to be able to share this moment with superstars like Ariana & Nicki, it's going to be such an amazing night!"

The news follows confirmation that 'Stay With Me' singer Sam Smith will also be performing on the bill.

"I have watched the VMAs every year since I was a kid," Sam said, following the announcement. "I am so insanely nervous but also so honoured to be performing.

"This truly is a pinch yourself moment for me," he added, also being up for both Best Male Video and MTV's Artist To Watch at the awards show.

This year's event is set to be bigger and better than ever before, with stars like Beyonce, Iggy Azalea and Eminem leading the charge on the awards nominations front.