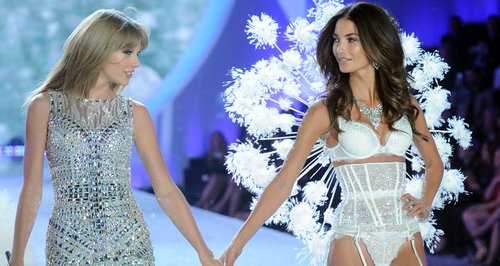 The supermodels at this year's event called the '22' singer "a great role model".

Taylor Swift has been called a "great role model" by some of the top Victoria's Secret supermodels.

The 'We Are Never Ever Getting Back Together' star was one of the musical performers at this week's Victoria's Secret Fashion Show 2013 and Karlie Kloss admitted she was thrilled to have met the singer.

"I think she's the coolest young girl. She's a great role model, and I love her music," she told Us magazine. "It's happening. I mean, girl power."

Taylor was also seen holding hands with Lily Aldrige, who told the publication it was a nice moment.

"We had a little moment at the end of her song 'Trouble,' where we walked in front of the stage together," she explained.

The US singer was also seen posing backstage with both models as well as Cara Delevingne for a touching Instagram snap captioned "Best Friends Forever."

Meanwhile, Taylor has been speaking to Capital recently and spoke of her admiration for female British singer Ellie Goulding and praised the unique sound of her voice.