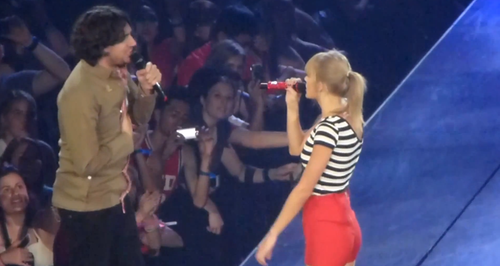 The '22' star performed her duet 'The Last Time' with the Northern Irish singer last night.

It was the first time the pair have performed the duet and Taylor was overjoyed at sharing the stage with Gary.

Taking to Twitter, she wrote: "So honored that @garysnowpatrol showed up in Sacramento to sing 'The Last Time' for the FIRST time live with me tonight!"

The singer has brought several celebrity guests to join her on stage over the course of her latest outing.

Nelly, Cher Lloyd and most recently Ellie Goulding are all singers to have performed with the country star.

Watch Taylor Swift and Gary Lightbody perform 'The Last Time' during her 'Red' tour show below:

Meanwhile, the show was the first from Taylor since the MTV Video Music Awards 2013.

The night saw the singer win Best Female Video for 'I Knew You Were Trouble' and she publically dissed Harry Styles during her acceptance speech.

Harry admitted he could "take a joke" when asked about the comments with Louis Tomlinson unimpressed by the stunt.