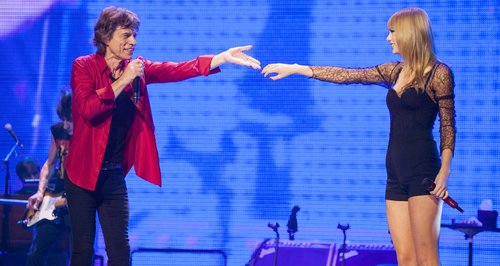 The 'Begin Again' singer talks about taking to the stage with Mick Jagger and co on their latest tour.

Taylor Swift has once again been speaking about performing with the Rolling Stones on their '50 And Counting' tour and said it was the "best moment" of her career so far.

The 'We Are Never Ever Getting Back Together' singer performed with the legendary rockers earlier this month in Chicago for a duet of 'As Tears Go By'.

"The whole band, they're so welcoming and wonderful and approachable and all the things you would hope your heroes would be," she told Access Hollywood of the day. "It's wonderful getting that phone call. Like, 'Hey, would you like to go and play with the Rolling Stones?' That is a bold, underlined, exclamation point 'Yes'!"

The country star continued: "[Mick and I] did this twirl in the dressing room when we were rehearsing, because we just started sorta kinda like dancing around the room and frolicking and it was really fun.

Watch Taylor performing with Rolling Stones on their tour below:

"So we decided to incorporate that into the actual performance... I really wanted to do the twirl - this one little twirl that we did - and that was pretty much the best moment ever."

Meanwhile, the singer also this month performed her first UK stadium date as she hit Wembley Stadium for the Capital FM Summertime Ball 2013.