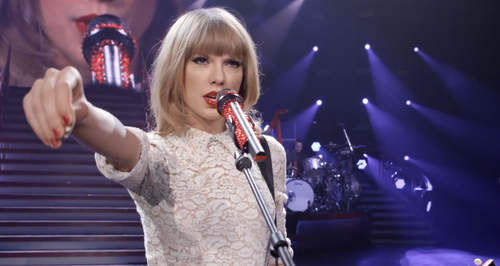 The '22' singer has unveiled the latest promo from her record of the same name.

Taylor Swift has released the official music video for her new single 'Red' – which showcases her current world tour.

The 'We Are Never Ever Getting Back Together' singer is on the road with Ed Sheeran and offers fans an insight into her live set-up with the new promo.

The video also follows on from her recent release with the British star on 'Everythign Has Changed'.

Taylor's pre-show routine, fan interaction and pyrotechnics are all included for the colourful showcase of her set.

She can be seen changing costumes and walking high above the crowd during several dare devil moments in the show.

Check out the official music video for Taylor Swift's new song 'Red' below:

She will also head back on the road on Saturday (6th June) in Pittsburgh before ending the US leg with three nights in Nashville this September.