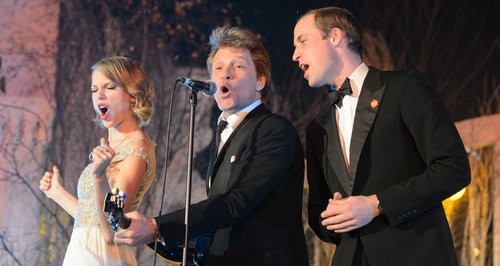 The trio performed 'Livin' On A Prayer' at a special event held at Kensington Palace last night.

Taylor Swift shared the mic with Prince William last night as they joined forces with Jon Bon Jovi to sing 'Livin' On A Prayer'.

The US female star was one of the special guests at a charity event held by The Duke of Cambridge at Kensington Palace.

The Winter Whites Gala was put on in aid of youth homelessness charity Centrepoint, and it's not the first time the Royal has sung the famous hit.

He also gave a karaoke rendition at the wedding of cousin Zara Phillips and Mike Tindall back in 2011.

Speaking to the Express before the show, Taylor said she was thrilled to be involved in the special event.

"I'm absolutely excited. I don't think I've ever played at a palace before so it is really wonderful," she said. "It's really wondrous, I think they've done an amazing job of putting this together."

Meanwhile, Taylor has been updating fans on the progress of her new album this week, revealing she's way ahead of schedule.

She will be back in the UK next year for her 'Red' tour at London's O2 Arena.