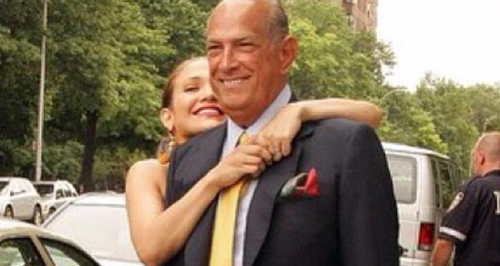 The legendary designer sadly lost his battle to cancer and the stars have expressed their sadness.

Oscar De La Renta, the legendary fashion designer behind some of the most iconic looks on the red carpet, has sadly lost his battle to cancer aged 82.

Responsible for dressing some of the hottest celebrities for awards shows and red carpet appearances, the stars have rallied around on Twitter following the tragic news.

Taylor Swift led the pack with a heartfelt message accompanied by a photo of her wearing one of Oscar’s stunning creations. She tweeted, “My all-time favorite designer has passed away. Oscar, it was an honor to wear your creations and to know you. In loving memory.”

My all-time favorite designer has passed away. Oscar, it was an honor to wear your creations and to know you. In loving memory.

Jennifer Lopez also tweeted her sadness at the news:

Me and the legendary Oscar DeLaRenta... Rest in peace...You will be missed.

So sad to hear Oscar de la Renta has passed away. Responsible for the worlds most beautiful dresses.

"Fashion is a trend, style lives within a person." - Oscar de la Renta. The world has lost another icon today. May a man who inspired so many rest in peace.

Naomi Campbell took to Instagram to express her sorrow:

The Gentleman of Fashion you will always be !!! R I P @oscarprgirl @OscarPRGirl #Oscar de la Renta

You made this a dream come a True !! R I P TheGentlemanofFashion #Oscar de la Renta

One thing is for certain, the red carpets will never quite be the same. Rest in peace Oscar De La Renta.