WATCH: This Woman's Reaction To Taylor Swift's Latest '1989' Tour Guest Is EVERYTHING

The 'Blank Space' star was only joined on stage by MICK JAGGER. We can barely breathe...

One woman’s reaction pretty much symbolises how the WHOLE world felt when they saw who Taylor Swift’s latest surprise tour guest was over the weekend.

The ‘Style’ star has becoming known for bringing out special guests on her ‘1989’ tour and she didn’t disappoint for her Nashville show, being joined by the one and only Mick Jagger from Rolling Stones!

Taylor and Mick rocked an amazing duet of the band’s iconic hit ‘(I Can’t Get No) Satisfaction’, which the audience loved every minute of.

One fan caught her 72 year-old grandma’s reaction to the surprise guest (loving EVERY minute of it), and Taylor herself tweeted out a link to the video, posting: “Why I like bringing out surprise special guests on tour”.

Watch Taylor and Mick rocking OUT on the '1989' tour below: 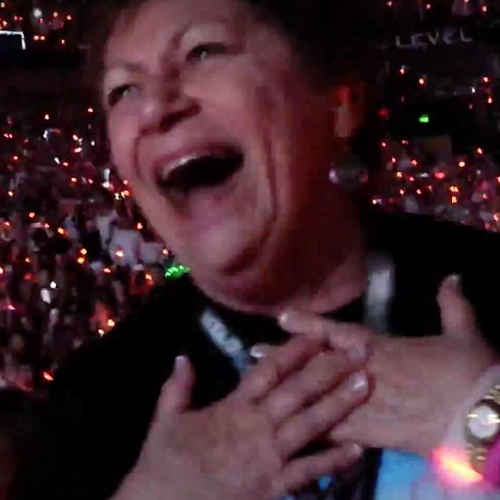 And just in case that WASN'T enough Taylor also brought out Leona Lewis for a duet of 'Bleeding Love'. And... we can barely breathe...

You set the stage alight @taylorswift13 ! So blessed to be part of such a special night https://t.co/AJwdVqJetb