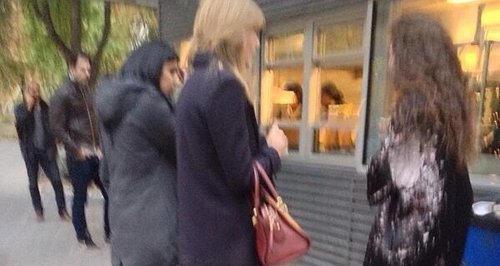 The artists showed no signs of any bad blood following recent comments from the 17 year-old New Zealand singer.

Taylor Swift and New Zealand star Lorde were pictured grabbing a bite to eat together in New York this week.

The artists were snapped by an eyewitness (Picture: @TrixieKaye) on Twitter who was close by the Madison Square Park Shake Shack.

The eyewitness also told E! News that the artists were very close and enjoying each other's company.

"[They] seemed like they had been friends for a long time. They seemed so close, like they were roommates or school mates."

The photo comes following recent comments from Lorde about Taylor, in which she said the '22' star was an "unrealistic" model for teens.

There was no signs of any bad blood as they hung out this week and Lorde has since spoken of her admiration for Taylor.