Is Kaylor over for good?

Any real Taylor Swift fan will remember the days when Taylor and Karlie Kloss were joined at the hip, but that’s a thing of the past now.

> Taylor Swift's Playlist Of Her Favourite Songs By Herself

However, with recent pictures surfacing online of Karlie hanging out with Taylor’s arch nemesis, Katy Perry, Kaylor might be over forever.

The model and Katy were spotted leaving popular spot Sushi Park in West Hollywood this week alongside a few other friends.

And yes, Karlie and Taylor could still be besties regardless of who the model’s hanging out with but the recent things that have happened make it less believable.

For example, in January the 25–year-old posted a clip from her campaign with Love magazine and captioned the video ‘Swish Swish,’ which we all know is the name of Katy Perry’s feisty song about Taylor Swift.

> Keep Up To Date On All The Taylor Swift News By Downloading Our Fancy App!

Since the pictures of Katy and Karlie got into the hands of fans, the model's comments on Instagram have been bombared with snake and rat emojis. 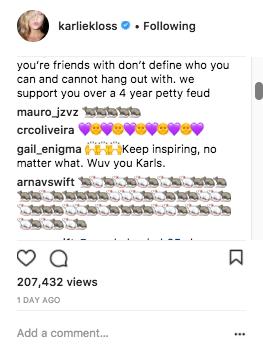 Talking of Taylor, here's a throwback to the time she performed 'Look What You Made Me Do' at our last Jingle Bell Ball...