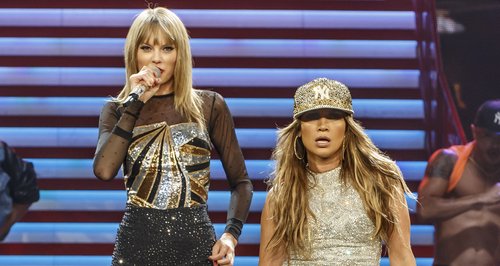 The 'I Knew You Were Trouble' singer talks about their on-stage team-up earlier this year.

Taylor Swift has been speaking to Capital about pop superstar Jennifer Lopez and said she was "so much fun" when they hung out on the 'Red' tour.

The 'We Are Never Ever Getting Back Together' star was joined by J-Lo for one of her gigs at the Staples Center this year.

"It was so much fun and she's just, she completely sets the tone," Taylor told Capital's Max. "She's so fun and so warm."

"I've always known her reputation as being very business like and gets stuff done and is very focused. But it was really cool to meet her because she doesn't come off that way."

Following the on-stage team-up, there had been rumours of bickering between the two camps and then of a collaboration.

Listen to Taylor Swift speaking to Capital about Jennifer Lopez below:

Regardless of the false reports, Taylor couldn't stop gushing about the 'On The Floor' singer.

She continued: "She's somehow very warm about all of it but then everything's really organized and goes off without a hitch."

Taylor has also recently spoken to Capital about Ellie Goulding – who also joined her at the Staples Center for her 'Red' tour and was full of praise for the British singer's voice.

Meanwhile, Taylor was seen hitting the catwalk this week for the Victoria's Secret Fashion Show 2013.