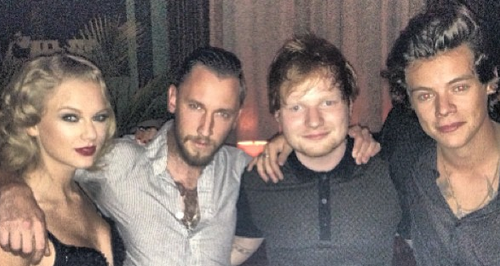 The former couple were pictured together following the awards ceremony in Brooklyn.

Taylor Swift has been pictured with One Direction's Harry Styles for the first time since the former couple split up earlier this year.

The pair were pictured together alongside mutual friend Ed Sheeran at an after show party following the MTV VMAs in Brooklyn, New York at the weekend.

In the photo, Harry and Taylor are seen posing on the outside of Ed and another man.

One Direction and Taylor were among the winners at the VMAs on Sunday (25th August), with the group being booed when they took to the stage to pick up an award for 'Best Song Ever'.

Catch-up on all the highlights from the MTV Video Music Awards 2013.