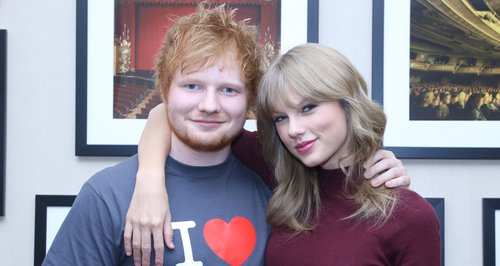 The '22' singer speaks to Capital about sharing the stage with the British singer and his achievements in America.

The 'I Knew You Were Trouble' star joined her pop pal on stage for one of the dates and told Capital's Max that she was so "proud" of the 'Lego House' man.

"I was almost tearing up because he introduced me and we're standing there in front of a screen in front of a sold out Madison Square Garden crowd and they all bought tickets with his name on it," she explained. "I was so proud of him."

Ed has enjoyed great success already in the US with Grammy nominations as well as huge tour dates.

"I think for him, success worldwide is inevitable," she added. "That's going to happen. He's amazing, he's talented, he's got an amazing record.

Listen to Taylor Swift speaking to Max about Ed Sheeran on Capital below:

Taylor Swift Talks About How Proud She Is Of Ed Sheeran

"The fact that it was able to happen so quick is what I was so proud of because we'd played a stadium in New York a couple months a go and then they put the tickets on sale for Madison Square Garden. And clearly, everyone who saw us, a huge percentage of them wanted to see him."

Taylor added: "That really shows a lot – that the fans were willing to go 'You know what, I want to see that guy do his own show to'."

Ed Sheeran also debuted new song 'New York' at the show and recently revealed the song he has penned for the credits to the new movie The Hobbit: The Desolation of Smaug.

Meanwhile, Taylor has also been speaking to Capital about her next studio album and promised to change things up from her multi-million selling 'Red'.