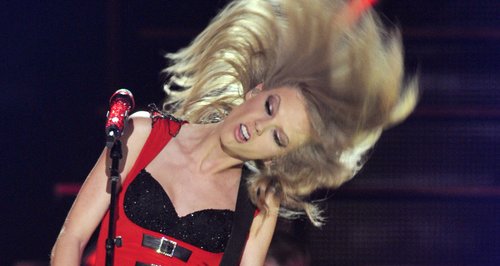 The 'I Knew You Were Trouble' star wore two different outfits throughout the night at the Nashville awards show.

Taylor Swift gave a powerful performance at the CMT Awards 2013 last night in Nashville, Tennessee as she made her return to the country awards show.

The 'We Are Never Ever Getting Back Together' singer wowed on the red carpet at the event on Wednesday evening (5th June) in a light cream dress, as she prepared to take to the stage later in the evening.

When she did perform Taylor opted to change into a rich red and black dress with heavy eye-make-up, as she performed her song 'Red' for the hundreds in attendance at the ceremony.

The performance follows a hectic week for the star which has included a live duet of 'As Tears Go By' with the Rolling Stones on Monday (3rd June) and the launch of her music video for 'Everything Has Changed'.

View a picture of Taylor Swift backstage at the CMT Awards 2013 below (Credit: PA):

The new single features the UK singer-songwriter and the accompanying video tells the story of a moving friendship between two children who bear more than a striking resemblance to the two stars.

Taylor Swift will next appear for a performance at the Capital FM Summertime Ball 2013 this Sunday 9th June at Wembley Stadium.

Check out Taylor Swift's performance of 'Red' at the CMT Awards 2013 below: