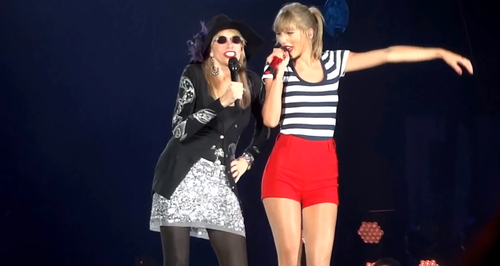 The 'I Knew You Were Trouble' singer was joined by the song's writer in Foxborough this weekend.

Taylor Swift spoke of her joy after a duet with Carly Simon on her 'Red' tour show this weekend.

The '22' star was joined by the 68 year-old in Foxborough, Massachusetts on Saturday night (27th July) to perform 'You're So Vain'.

Taylor tweeted: "Got to sing 'You're So Vain' with Carly Simon at Gillette Stadium tonight!!!!! Unreal. I could not possibly look up to her more."

The 'We Are Never Ever Getting Back Together' singer has also been joined by Fall Out Boy's Patrick Stump, rapper Nelly and Train's Patrick Monahan at various stop-offs on her latest jaunt.

Watch Taylor Swift and Carly Simon perform 'You're So Vain' live together below:

Meanwhile, it was also confirmed this weekend that Taylor Swift will not be appearing in One Direction's upcoming movie This Is Us.

The singer enjoyed a brief romance with Harry Styles at the end of 2012 before splitting over the new year.